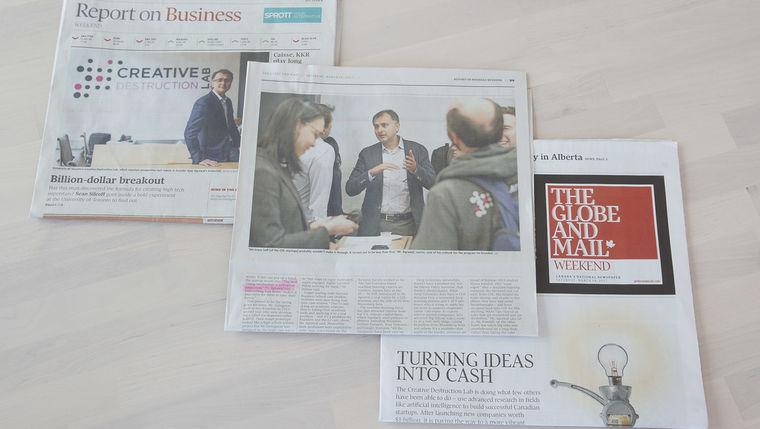 Since its inception in 2012, U of T’s Creative Destruction Lab (CDL) has invented itself as “an absolute perfect crash course for running a company,” which CEO and new Lavin speaker Ajay Agrawal discusses in this “Report on Business” cover story.

Agrawal developed CDL with a simple, competetive restructuring in mind: create a business mentorship program that partners “teachers” (successful entrepreneurs and business minds) with “students,” inviting them to work symbiotically, and with the possibility of mutual success. The nine-month program pairs startup founders with experienced technology entrepreneurs and investors “in a unique setting that is laser-focused on designing a series of objectives with measurable deliverables.” Moreover, it provides a unique entrepreneurial think tank for those developing new technologies and Artificial Intelligence, which Agrawal is uniquely positioned to cultivate as one of the leading forces in the economics of AI. Agrawal co-authored “Simple Economics of Machine Intelligence” in the Harvard Business Review online and co-organized the research session on the Economics of Artificial Intelligence at the American Economics Association annual conference in Chicago.

In the “Report on Business” feature, Agrawal explains that he developed the idea for CLD based on an idea he had that there was “a market for judgment.” He goes on to explain that he wanted “to bring together some of the sharpest and shrewdest investors to advise cutting-edge Canadian research scientists and help them build companies around their technology breakthroughs.”

Vitally, Agrawal (who was awarded Professor of the Year by MBA classes at the Rotman School seven times!) also wanted to ensure a new way that the program’s success could be measured, not by the “number of jobs or startups generated—a typical yardstick—but equity value created by CDL companies as they raised money.”

In true entrepreneurial mode, Agrawal isn’t satisfied with the growth that CDL has secured for its alumni (funding from $1.7 to $120-million). He still wants to develop the program and its capacity to affect Canadian business to even greater success. “We are so far from achieving the mission,” he says, tireless as ever.

To book Ajay Agrawal for your next engagement, contact the Lavin Agency today.