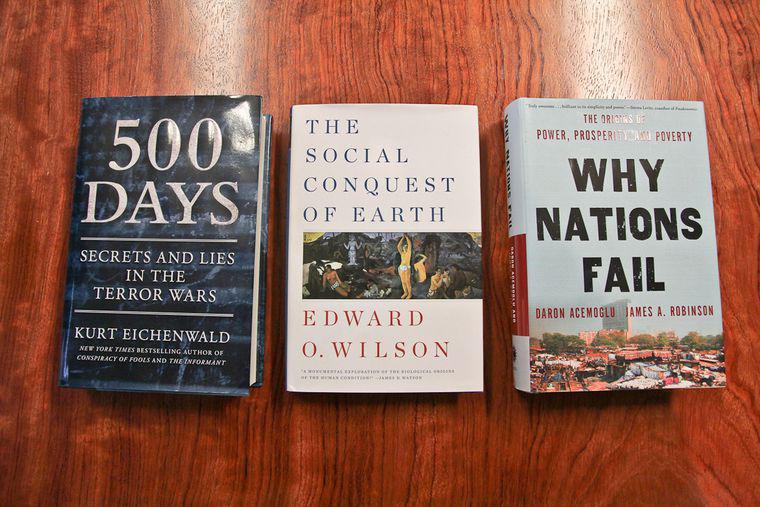 Washington Post Rounds up the Year's Best Books; Three Are By Lavin Speakers.

The Washington Post has hand-picked 50 of the best non-fiction books from 2012—and three of them are written by Lavin speakers! If you're looking for a few new page-turners to add to your collection, look no further. The first on the list is 500 Days by Kurt Eichenwald. Described by The Post staff as, "an anecdote-rich, page-turning account of President George W. Bush’s war on terrorism," his book chronicles the 18 months that followed 9/11 and the effects that the decisions made during that time had on American domestic and foreign policy. Eichenwald is one of America's most respected business writers and a compelling investigative journalist. He is a two-time recipient of the George Polk Award and is a Pulitzer Prize nominee.

Edward O.Wilson's The Social Conquest Of Earth was also among the list of notable works of non-fiction. "This renowned scientist unflinchingly defines the human condition as largely a product of the tension between the impulse to selfishness and to altruism, individual selection vs. group dynamic," The Post's review reads. The world renowned biologist had his book debut on The New York Times Bestseller list and his previous works have been incredibly well received—earning him two Pulitzer Prizes!

The third Lavin speaker on the list is Daron Acemoglu for his book Why Nations Fail, which he co-authored with James Robinson. "This racing, wildly ambitious masterpiece argues that institutions — not geography, not ignorant leaders, not hobbled cultures — make the difference between the well-being of even the poorest American and the truly impoverished of the world," the review reads. The book was listed as one of the top 10 books of 2012 by The Post. As one of the most-cited economists in the world, Acemoglu's opinions have traction—and when he proposes a theory, people listen.