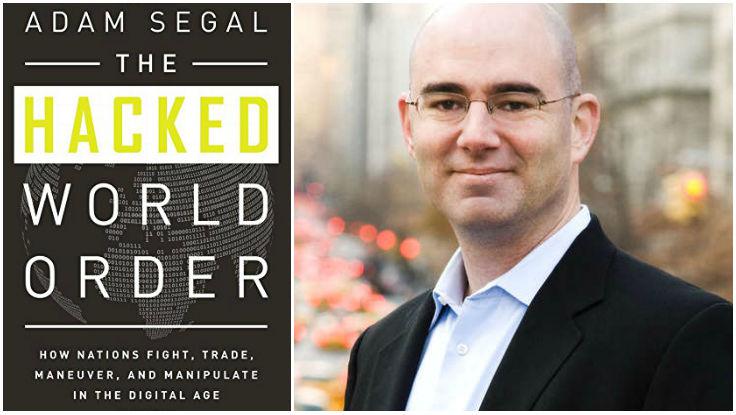 The Internet as libertarian utopia—a boundless source of free information, unimpeded economic exchange, and virtual anonymity—is certainly not the Internet of today (or tomorrow). Or so argues Adam Segal, Director of Cyberspace and Digital Policy at the Council on Foreign Relations, in his upcoming book The Hacked World Order (available this February). When states increasingly jockey for control over cyberspace, each act of sabotage, espionage, and assault carries ominous implications for our personal freedoms, economic security, and collective wellbeing. Get ready for a new, fractured Internet—and one much less free than before.

Adam Segal has long held top appointments in the world of cybersecurity. He’s the expert and scholar tapped by the Joint Chief of Staffs, State Department, and Office of the Director of National Intelligence for up-to-date briefings on digital espionage. His previous books, Advantage: How American Innovation Can Overcome the Asian Challenge (2011) and Digital Dragon: High-Technology Enterprises in China (as well as his directed CFR project, Defending an Open, Global, Secure, and Resilient Internet) created new frameworks for thinking through global, interconnected problems. Now, in The Hacked World Order: How Nations Fight, Trade, Maneuver, and Manipulate in the Digital Age, he’s articulating the how, why, and scope of authoritarian control on the web: what it means for virtually every nation, business, and plugged-in individual in the world.

“The world’s nations have explored ways to leverage cyberspace since before there even was a cyberspace,” writes Kirkus Reviews on the book, “but, as Segal ... writes, the period from June 2012 to June 2013 might well be reckoned Year Zero in the battle to control cyberspace ... Netizens and white-hat programmers will be familiar with Segal’s arguments, but most policymakers will not—and they deserve wide discussion.”

To read a China-centric excerpt of the upcoming release—titled “Why China Hacks the World”—head over to Christian Science Monitor. For now, read the full description from the publisher, Public Affairs:

“The Internet today connects roughly 2.7 billion people around the world, and booming interest in the ‘Internet of things’ could result in 75 billion devices connected to the web by 2020. The myth of cyberspace as a digital utopia has long been put to rest. Governments are increasingly developing smarter ways of asserting their national authority in cyberspace in an effort to control the flow, organization, and ownership of information.

In The Hacked World Order, Adam Segal shows how governments use the web to wage war and spy on, coerce, and damage each other. Israel is intent on derailing the Iranian nuclear weapons program. India wants to prevent Pakistani terrorists from using their Blackberries to coordinate attacks. Brazil has plans to lay new fiber cables and develop satellite links so its Internet traffic no longer has to pass through Miami. China does not want to be dependent on the West for its technology needs. These new digital conflicts have as yet posed no physical threat—no one has ever died from a cyberattack—but they serve to undermine the integrity of complex systems like power grids, financial institutions, and security networks.

Segal describes how cyberattacks have the potential to produce unintended and unimaginable problems for anyone with an Internet connection and an email account. State-backed hacking initiatives can shut down, sabotage trade strategies, steal intellectual property, sow economic chaos, and paralyze whole countries. Diplomats, who used to work behind the closed doors of foreign ministries, must now respond with greater speed, as almost instantaneously they can reach, educate, or offend millions with just 140 characters.

Beginning with the Stuxnet virus launched by the US at an Iranian nuclear facility in 2010 and continuing through to the most recent Sony hacking scandal, The Hacked World Order exposes how the Internet has ushered in a new era of geopolitical maneuvering and reveals its tremendous and terrifying implications for our economic livelihood, security, and personal identity.”

To hire cybersecurity expert Adam Segal as the keynote speaker of your next event, contact The Lavin Agency speakers bureau.