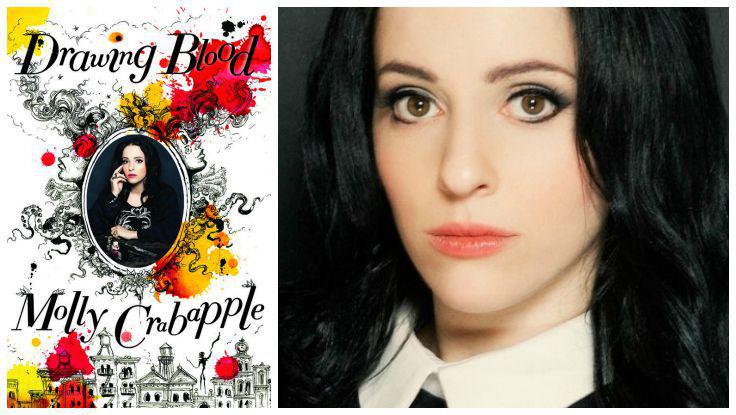 VICE editor and world-famous visual artist Molly Crabapple’s new book hits stores on December 1, 2015 from HarperCollins. Described as “an unforgettable memoir of the years between 9/11 and the Occupy movement—in New York City and around the world—by the renowned underground artist and journalist,” Drawing Blood captures an artist in provocative dialogue with the world at the height of her powers.

Called “An emblem of the way art can break out of the gilded gallery” by the New Republic, Crabapple has drawn in Guantanamo Bay, Abu Dhabi’s migrant labor camps, and with rebels in Syria. She is a contributing editor for VICE, and has written for publications including The New York Times, Paris Review, and Vanity Fair. Her work is in the permanent collection of the Museum of Modern Art.

At this year’s Annual George Polk Awards Seminar in Brooklyn, Crabapple spoke to the seminar’s theme of “Satire in Journalism” with insights into her creative process, and the human truths Drawing Blood promises to deliver:

I truly believe that good art is antithetical to cliché. Cliché robs people of their humanity. It turns them into objects and stereotypes. Good art is all about puncturing that. So just by doing art that’s good, thoughtful, rigorous, you’re cutting away at cliché; you’re trying to get to the straight human truth of the matter.

In language that is fresh, bracing, and deeply moving—and illustrations that are rich, irreverent, and gorgeous—here is a memoir that will change the way you think about art, sex, politics, and survival in our times.

From a young age, Molly Crabapple was a rebel in search of a cause. After graduating from high school on New York’s Long Island, she left America for Europe and the Near East, a waiflike yet steel-sprung young artist plunging fearlessly into the faraway cultures she had come to love through the stories of her artistic heroes.

Returning to New York as an art student, she supported herself by working as a model, a burlesque performer, and an early model for the famous SuicideGirls. Eventually she landed a gig as house artist at Simon Hammerstein's legendary nightclub The Box, the epicenter of decadent Manhattan nightlife before the financial crisis of 2008—where she witnessed the class divide, between the bankers of Wall Street and the entertainers who walked among them in a bawdy, drug-fueled circus of mutual exploitation. Then, in the wake of the crash, the emerging Occupy movement galvanized Molly to lend her talent to a new form of witness journalism. Dubbed “Occupy’s greatest artist” by Rolling Stone, she went on to write and illustrate stories from Guantanamo to Syria to Rikers Island to the labor camps of Abu Dhabi, transforming her work—her lifelong tool for making sense of the world around her—into a voice for the powerless.

Now, with the same blend of sharp-eyed reportage and unforgettable artwork that has marked her work in venues from the New York Times to Vanity Fair to Vice, Molly brings this tumultuous era back to life in a book that captures art and life in our times as viscerally as Patti Smith captured hers in Just Kids.


In her talks, Molly Crabapple speaks on the direct ways that making art contributes to political movements—by adding the visceral and immediate power of images to the words and ideas that drive political engagement. She helps us recognize the opportunity to do more, and make a difference. To book Molly Crabapple as a speaker for your next event, contact The Lavin Agency.