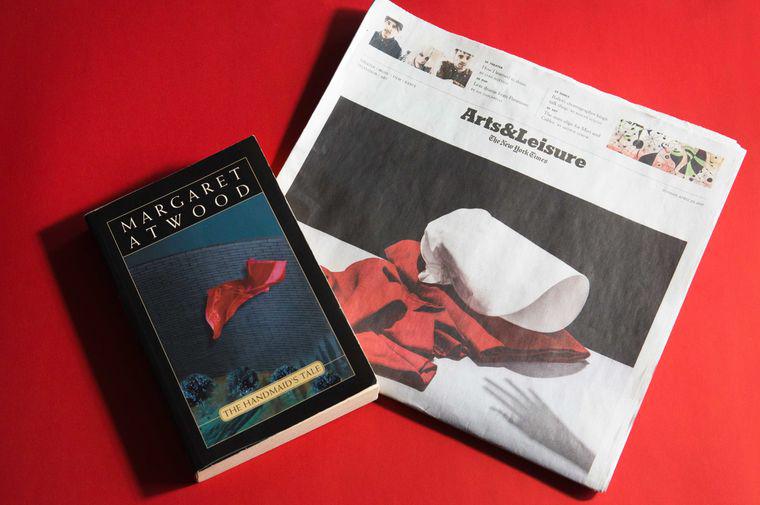 How Does a 30-Year-Old Novel Become a Runaway Bestseller and Hit TV Show? Margaret Atwood’s The Handmaid’s Tale Rides Again

Wherever you look these days, swaths of red seem to be marking the pages of every major publication, from The New York Times to Teen Vogue. Why? That vibrant crimson is the visceral memory cue for Margaret Atwood’s 1985 novel The Handmaid’s Tale, and it means anything but “stop,” as its current climb to the top of the bestseller list proves.

Called a “buoyant doomsayer” in The New Yorker’s expansive profile (“The Prophet of Dystopia”), Atwood’s writings—from poetry, to essays, to fiction, have always been engaged with the world around her. And in the case of The Handmaid’s Tale, the world has doubled back to engage with it, full force. “The timing could not be more fortuitous,” writes the New Yorker, “Though many people may wish that it were less so. In a photograph taken the day after the Inauguration, at the Women’s March on Washington, a protester held a sign bearing a slogan that spoke to the moment: ‘MAKE MARGARET ATWOOD FICTION AGAIN’.”

— Margaret Atwood, New York Times Book Review
Told from the perspective of Offred, a woman forced into serving as a reproduction vessel in the newly theocratic nation of Gilead, The Handmaid’s Tale is dystopia born of historical precedents. As Atwood reflected upon in The New York Times Book Review, “If I was to create an imaginary garden I wanted the toads in it to be real. One of my rules was that I would not put any events into the book that had not already happened in what James Joyce called the ‘nightmare’ of history, nor any technology not already available. No imaginary gizmos, no imaginary laws, no imaginary atrocities. God is in the details, they say. So is the Devil.”

Reality and creative speculation co-mingle to new effect in Hulu’s striking series, starring Mad Men’s Elisabeth Moss and Orange is the New Black’s Samira Wiley, and premieres on Wednesday, April 26. In another in-depth Times feature, Katrina Onstad noted that “The Handmaid’s Tale has been a film, a play, an opera, a ballet, and — soon — a graphic novel. The book has never been out of print, but Ms. Atwood said that she noticed a drop in interest in the early 1990s, around the time a film adaptation by Harold Pinter, starring Natasha Richardson, was released to a tepid reception. ‘Right after the Iron Curtain came down, people were saying: It’s the end of history — tra la la! All is well! At those times, dystopia is less chord striking because it seems less possible,’ Ms. Atwood said.”

History begins again, then, as interest in The Handmaid’s Tale continues to grow. And while audiences renewed attraction to the dystopic might seem like a bad omen, the resilience of this story proves that the appetite for truth in art is as buoyant as the doomsayer herself.

To book Margaret Atwood for your event, contact the Lavin Agency today.