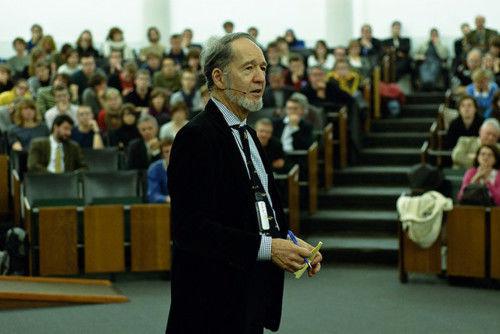 Jared Diamond Responds to Mitt Romney’s Use of Guns, Germs, and Steel

In a recent speech in Jerusalem, Mitt Romney referenced Guns, Germs, and Steel, the Pulitzer Prize-winning book by Lavin speaker Jared Diamond—using it to explain the relationship between geography, culture, and wealth. Now, in a New York Times Op-Ed, Diamond responds, writing, “[Romney’s interpretation] is so different from what my book actually says that I have to doubt whether Mr. Romney read it.” Here’s Dr. Diamond, from his Times’ piece, “Romney Hasn’t Done his Homework”:

MITT ROMNEY’S latest controversial remark, about the role of culture in explaining why some countries are rich and powerful while others are poor and weak, has attracted much comment. I was especially interested in his remark because he misrepresented my views and, in contrasting them with another scholar’s arguments, oversimplified the issue.

It is not true that my book “Guns, Germs and Steel,” as Mr. Romney described it in a speech in Jerusalem, “basically says the physical characteristics of the land account for the differences in the success of the people that live there. There is iron ore on the land and so forth.”

That is so different from what my book actually says that I have to doubt whether Mr. Romney read it. My focus was mostly on biological features, like plant and animal species, and among physical characteristics, the ones I mentioned were continents’ sizes and shapes and relative isolation. I said nothing about iron ore, which is so widespread that its distribution has had little effect on the different successes of different peoples. (As I learned this week, Mr. Romney also mischaracterized my book in his memoir, “No Apology: Believe in America.”)