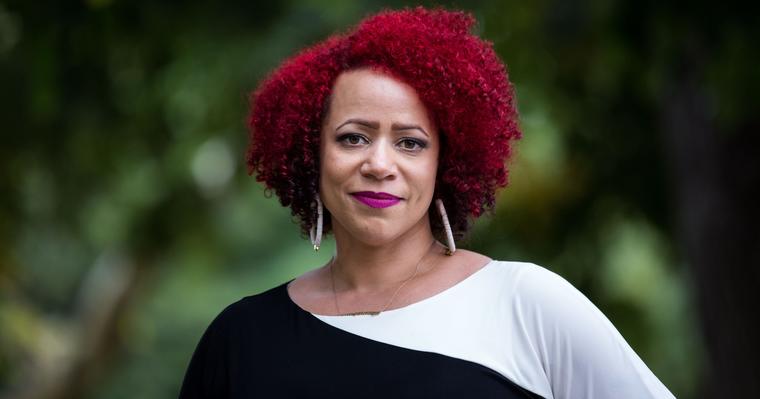 The viral, groundbreaking sensation of the New York Times Magazine’s “The 1619 Project” is still going strong, with its lead writer, Nikole Hannah-Jones appearing on The Daily Show with Trevor Noah to discuss the message and history behind the landmark project observing the 400th anniversary of slavery in America.

“History seems like it has been written, so why try and write it again?” That’s the first question Trevor Noah asks Nikole Hannah-Jones after she sits down on his hit Comedy Central show. And, true to form, Hannah-Jones has a comprehensive, complex answer at the ready. “History has been written, but it’s been written to tell us a certain story. The 1619 Project is trying to reframe that story,” she explains. “It’s really about the ongoing legacy of slavery. We’ve been taught that slavery was a long time ago, get over it, which is something every black person in this country hears at some point. And “The 1619 Project” is really saying that slavery was so foundational to America and its institutions that we are still suffering from that legacy now—and it’s exploring the many ways that we still are.”

Apparently a point of contention about the project, that Noah brings up, is that the year in question predates the formation of America. “It’s funny because this is year also the 400th anniversary of the Mayflower, yet no one argues that we shouldn’t learn about the Mayflower because it predates the United States,” says Hannah-Jones. She then goes onto discuss her own American identity, and her very patriotic father. Incredibly proud to be American, he had a large American flag on display—making him one of the only Black people she knew to do so, much to her shame. However, she goes on to explain, “As I started researching for this project, I got that he understood something I didn’t: that no one has the right to take away our citizenship and our rights to think of ourselves as American, because so much of what Black people have done is what has built this very country that we get to live in today.”

Despite all the difficult truths “The 1619 Project” grapples with, Hannah-Jones is ultimately hopeful for the future of the nation. “We said we were founded as a democratic republic, but most Americans could not vote at the time of the Constitution. But thanks largely to Black resistance and freedom struggles, we are as close to a multiracial democracy as we’ve ever been,” she tells Noah. While it’s still true that the harm that was done has never truly been dealt with and addressed, it’s her hope that “The 1619 Project” can, by confronting these truths, urge Americans to “…finally start to repair the harm that was done, and then finally start to live up to be the country of our ideals.”

You can watch the full interview here. If you are in Canada, click here.