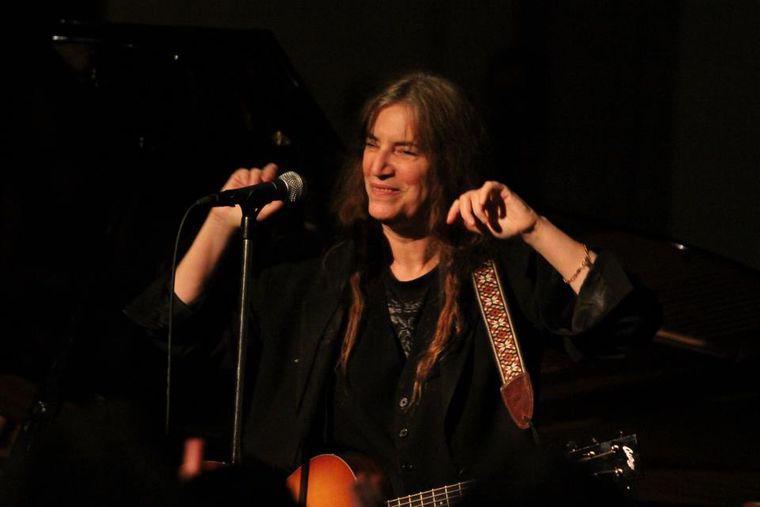 People Have the Power: A Review of Patti Smith at the AGO [PHOTOS]

Last week, Patti Smith performed an amazing show at The Art Gallery of Ontario, where her Camera Solo exhibit is on display—and some lucky Lavin staffers were there! Here’s our review. The punk legend sang a quiet but powerful set of songs to an audience who punctuated the night with shouts of devotion, gratitude, and, at times, crazed joy. Patti played “in the round,” fans on all sides of her, standing under a Frank Gehry-designed staircase that jutted out from the wall, like extruded wooden Play-Doh. Performing with her daughter Jesse (on piano) and Tony Shanahan (on acoustic guitar), she dedicated songs to Neil Young, Fred “Sonic” Smith, and Roberto Bolano—whose posthumous book, 2666, she deemed “the first masterpiece of the 21st century.” (She also name-dropped the new My Bloody Valentine album!) For the evening’s final number, Patti Smith stepped away from the mic. Walking around the stage, she listened as the crowd sang back the chorus to one of her best loved songs: “People have the POWER!” All in all, a wonderful night!

Here are some photos from Patti Smith’s performance at the Art Gallery of Ontario (AGO), taken exclusively for Lavin by Paul Terefenko: