How can we use photography to humanize people in conflict zones? 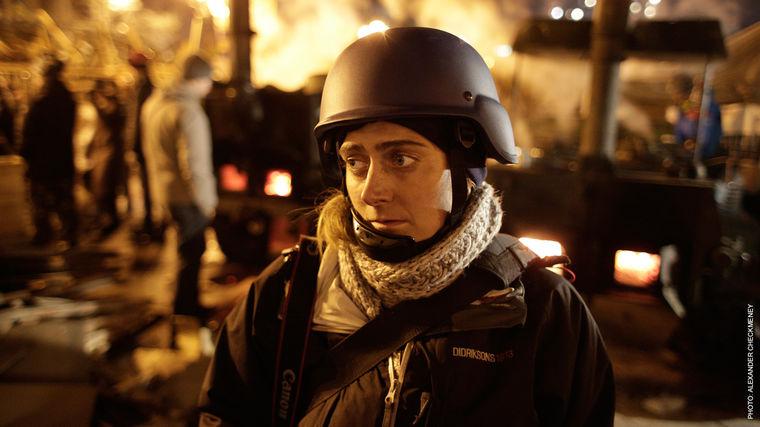 Meet the Fighters and Mourners of the Ukrainian Revolution

Portraits From the Black Square

“Men fight wars, and women mourn them,” says documentary photographer Anastasia Taylor-Lind. When she arrived in Kiev in February 2014, Taylor-Lind found Independence Square under siege. At her makeshift studio a few feet away, she began documenting the unrest. In moving talks, this TED Fellow shares what she discovered about art, revolution, and humanity.

Anastasia Taylor-Lind is a photojournalist, a TED fellow, and a National Geographic Magazine contributor. She is currently a Harvard 2015 Nieman Fellow, based out of Boston. She works for leading magazines all over the world on issues relating to women, birth rights, population, and war.

“Maidan: Portraits from the Black Square is a powerfully concentrated statement, both about the nature and cost of violent protest.”

Taylor-Lind has lived in Syria and Lebanon, and travels regularly in the Middle East, Russia, and Eastern Europe. Her images are exhibited internationally and she has received a number of prestigious photography awards from a diverse range of organisations that enable her to undertake in-depth long-term reportage.

Her first book Maidan: Portraits from the Black Square documents the 2014 Ukrainian uprising in Kiev. She holds degrees in Documentary Photography from the University of Wales Newport and the London College of Communication.

Fighters and Mourners of the Ukrainian Revolution

When Anastasia Taylor-Lind arrived in central Kiev on 1 February 2014, Independence Square was under siege, surrounded by police loyal to the government. Rising tensions culminated in the worst day of violence on 20 February and the following day President Yanokovych fled Ukraine. During the protests, Taylor-Lind began shooting portraits against the black backdrop of her improvised studio, just a few feet away from the barricades in the square. The “fighters” are identified by their homemade body armour, and the “mourners” by the bunches of flowers they have brought to pay their respects to the dead. In this talk, Taylor-Lind shares these stark, arresting images, revealing the intimate faces of those involved in, and impacted by, the unrest. It’s a powerful reflection on war, art, and humankind.

Maidan: Portraits from the Black Square

When Anastasia Taylor-Lind arrived in Kiev on 1 February 2014, Independence Square was under siege. These portraits have been uniformly shot against the black backdrop of Taylor-Lind’s improvised studio, removing them from the barricades just a few feet away. The ‘fighters’ are identified by their homemade body armour, and the ‘mourners’ by the flowers. Captured with an air of stillness and reflection, these photographs show the individuals involved in, and impacted by, the unrest.

How a Lack of Representation Is Hurting Photojournalism

How to Disrupt Compassion Fatigue

Ordinary people in an extraordinary moment: A TED Fellow shoot portraits of the men + women caught up in revolution in Ukraine