How can we lift poor nations out of poverty? It starts with strong institutions.

Famed Economist and Political Scientist | Co-Author of Why Nations Fail

Director of Cyberspace and Digital Policy at Council on Foreign Relations 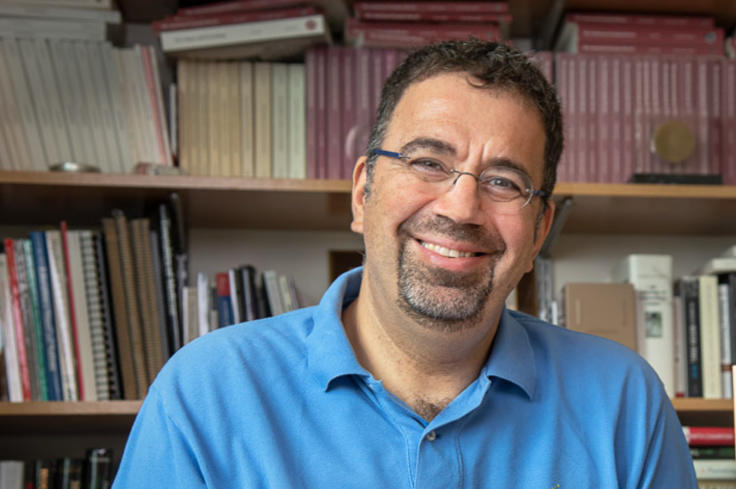 Does Automation Lead to New Industries?

How Do Automation and Job Creation Work Together

What Will AI's Economic Impact Be?

Can We Create New Tasks in the Era of Intelligent Machines?

In the face of increasing automation, we’ve been far too complacent, argues MIT economist and Why Nations Fail co-author Daron Acemoglu. We’re at a tipping point. Either we close the skills gap and prepare for the future of work—and the full impact of AI—or risk losing more than just jobs. In his bracing, brilliant talks, Acemoglu shows that we must overhaul our systems in light of this new technological tsunami in order to thrive. The time is now.

“A wonderfully readable mix of history, political science, and economics, this book will change the way we think about economic development.”

A professor of Applied Economics at MIT, Daron Acemoglu was twice named one of Foreign Policy’s Top 100 Global Thinkers, as well as the 2019 winner of the Kiel Institute’s Global Economy Prize. In the words of The New York Times Magazine, he is “as hot as economists get.” He has received the prestigious John Bates Clark Medal for being a top economist under 40, the Nemmers Prize in Economics, the BBVA Foundation Frontiers of Knowledge Award, and an Andrew Carnegie fellowship. Acemoglu is the editor of Redesigning AI, a look at how new technologies can be put to use in the creation of a more just society. He also published (with Harvard’s James Robinson) The Narrow Corridor: States, Societies, and the Fate of Liberty: the highly anticipated follow-up to their landmark text, Why Nations Fail. It’s a vital, big-picture assessment of how liberty flourishes in select states, yet devolves into authoritarianism or even anarchy in others—and how liberty can keep thriving, in spite of new, global threats. The Narrow Corridor was named one of both the Financial Times and Kirkus Reviews’ Best Books of 2019. Called “A work of staggering ambition...Smart and timely,” by Newsweek, and “Another outstanding, insightful book by Acemoglu and Robinson,” by Nobel Laureate Peter Diamond, The Narrow Corridor is an essential exploration of liberty for today’s age.

Acemoglu is also the co-author, with Robinson, of The New York Times bestseller Why Nations Fail: The Origins of Power, Prosperity, and Poverty—a major work of historical, political, and cultural heft that comes along only once every few years. Throughout this ambitious, bracing work (shortlisted for the Financial Times Business Book of the Year Award), Acemoglu answers a question that has confounded leading minds for centuries: why are some nations rich, while others poor? Instead of looking to weather, cultural practices, or geography, we need to look to institutions, he argues—both strong and poor, political and economic—to understand prosperity and success. Called “required reading for politicians and anyone concerned with economic development” by Jared Diamond (Guns, Germs, and Steel), and “a splendid piece of scholarship and a showcase of economic rigor” by The Wall Street Journal, Why Nations Fail offers illuminating solutions to our most fundamental economic problems: how to move billions out of poverty, build robust, sustainable institutions, and empower effective democracy.

Today, Acemoglu’s expertise stretches across the full spectrum of macroeconomics, with a focus on the role of institutions in political and economic growth. How will institutions react to the demographic shifts to the 21st century? How will the rise of new superpowers change the global economy? How will the nature of work and employment transform as more jobs—in both North America and in the developing world—are replaced by robotics and artificial intelligence? And how can we protect our vital democratic institutions, the foundations of our political system, as financial crises, polarizing politics, and reduced wages erode trust in democracy itself? For answers—actual answers, informed by original research and one of our sharpest minds—audiences turn to Daron Acemoglu.

Acemoglu is an Institute Professor at MIT and an elected fellow of the National Academy of Sciences, the American Academy of Arts and Sciences, the Econometric Society, and the Society of Labor Economists. His academic work covers a wide range of areas, including political economy, economic development, economic growth, inequality, labor economics, and economics of networks. He is the author of five books, including Why Nations Fail and The Narrow Corridor. Acemoglu has also written for mainstream magazines such as Esquire and Foreign Policy, is a regular speaker for banks, think tanks, corporations, and other major institutions across the globe, and has received high-profile attention in The New York Times, Washington Post, Financial Times, Bloomberg Businessweek, The Economist, and many more. He also co-edits academic publications, such as The Journal of Economic Growth.

Acemoglu has received numerous awards and prizes, including the Carnegie Fellowship, the Jean-Jacques Laffont Prize, and the Global Economy Prize. He was awarded the John Bates Clark Medal, the Erwin Plein Nemmers Prize, and the BBVA Frontiers of Knowledge Award.

“Daron gave a very stimulating presentation. He contributed greatly to the success of the conference and it was a real pleasure and honor to work with him. Thank you for the great support of Lavin. It was a pleasure to work with you.”

Robots are now everywhere. And while previous waves of technology destroyed livelihoods, they also created new jobs in the process. But that’s not the case today. According to Daron Acemoglu’s original research, evidence shows that robots are reducing wages and displacing workers without ushering in new employments. So—does this spell the end of work for most Americans?

In a keynote addressing robotics, AI, and the future of work, leading labor economics researcher Daron Acemoglu argues that we have mounted an inadequate response to this new technological tsunami. To turn robots into a tide that lifts all boats, we need to create a new economy, based on more flexible skills and new organizations. This requires a total overhaul of our educational system, workplace relations, and fiscal system. We are at a critical juncture, Acemoglu states:  inaction will not only deepen the plight of millions, but will increasingly undermine the foundations of our democracy and sow further discord. The right response, on the other hand, will create shared prosperity and a new world of work.

The Challenge of U.S. Democracy Creating a New Economic Compact for Greater Prosperity

Democracy in the U.S. stands at a crossroads, argues Daron Acemoglu—and it’s due to three massive trends. First, globalization and new technology have increased productivity and profits, but reduced wages and employment for middle-class Americans. Second, the financial crisis and its aftermath revealed the fragility of U.S. growth (and the cozy link between Washington and Wall St.) while destroying trust in our institutions. And third, politics is ever more polarizing, eroding the very norms that made our democracy function for the last century. So how can we rebuild—and rebound? In this timely keynote, Acemoglu warns that we have crucial choice: we can either buckle in the face of our critical challenges, or we can return from the precipice by creating a new economic compact. By strengthening U.S. civil society, the media, and citizen activism, he argues, we can foster greater shared prosperity and rebuild the foundations of our democratic tradition from the ground up.

Why Nations Fail The Origins of Power, Prosperity, and Poverty

Why are some nations extremely rich while others remain cripplingly poor? And why is the gap between the two widening? If we know why nations are poor, we can help them. And if we know what propels great societies into the future, we can move towards that future today. What separates the haves from the have-nots, Daron Acemoglu argues in this wildly original keynote, has nothing to do with geography or natural resources, as is commonly believed. Instead, nations live or die on the soundness of their institutions, the fairness of their laws, and the transparency of their governments. Drawing on powerful examples from America to Mexico to Sierra Leone to Singapore, Acemoglu shows us that, with strong institutions in place, individuals (and nations) are given the incentive and the opportunities to achieve and innovate.

Work, Democracy, and Justice in the Age of Automation

States, Societies, and the Fate of Liberty

Economic Origins of Dictatorship and Democracy

MIT's Acemoglu Sees a Skills Gap in the U.S.

Study: Robots set to displace millions of U.S. workers by 2025

We Are the Last Defense Against Trump

American Democracy Is Dying, and This Election Isn’t Enough to Fix It

Why Some Countries Go Bust

Nations fail because their leaders are greedy, selfish and ignorant of history

What Makes a Nation Rich? One Economist's Big Answer

“Economist in a League of His Own”: Lavin Speaker Daron Acemoglu Wins the 2019 Global Economy Prize

The Global Economy Prize has been awarded by the Kiel Institute for the World Economy and its...

the future of work

The Future of Work: Four Speakers Take on the Promises and Problems of an Automated Workforce

To leading economist Daron Acemoglu, our economic and political institutions need a dramatic...

Daron Acemoglu & James Robinson's Why Nations Fail: A "Must Read"

"To say that Why Nations Fail [written by Lavin economics speakers Daron Acemoglu and James Robinson...

"The question 'why are some countries poor and others not?' is one of the most important questions...

“It's no mystery how you get economic growth,” bestselling author Daron Acemoglu says in a new, hour...

Why Nations Fail Co-Author Daron Acemoglu "As Hot as Economists Get."

Daron Acemoglu is “about as hot as economists get,” writes The New York Times Magazine in a recent...

Daron Acemoglu: The Widening Gap Between Rich and Poor

Daron Acemoglu, an academic superstar and one of the world's most-cited economists, talks about...

Daron Acemoglu, one of the world's foremost authorities on economics, feels uneasy about what's...

Daron Acemoglu: One of the World's Most Cited Economists Offers Solutions

One of the world’s most cited economists, Daron Acemoglu has made tremendous strides in answering...

Think Groupon, Not Facebook: Daron Acemoglu on the Role of Social Networks in The Middle East Uprisings

While many people are quick to dub the protests sweeping the Middle East as “The Facebook...

Daron Acemoglu is the 88th Most Influential Thinker on the Planet

MIT economist Daron Acemoglu has been named to Foreign Policy’s list of 100 Global Thinkers, for...