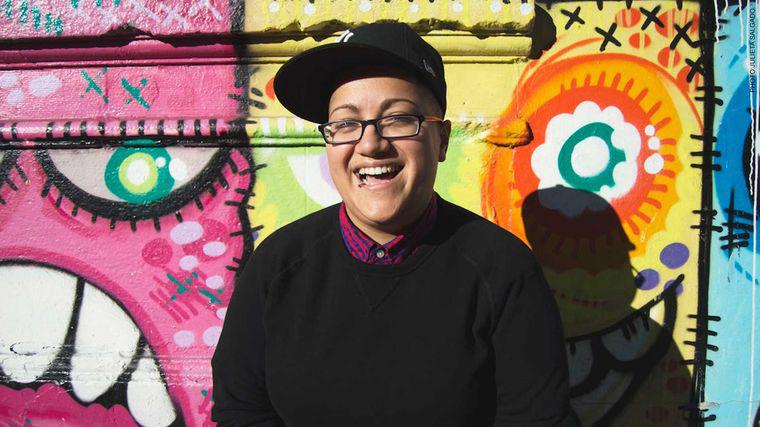 The Joy that Comes Out of Hardships Is Revolutionary (4:02)

You Don’t Need Permission to Tell Your Story (7:21)

Writing Your Heritage is Radical Creativity (5:06)

Gabby Rivera grew up with superheroes on the block. Her mom, aunties, and the women in her community were the strongest people she knew: seamstresses and paramedics who’d sit around the dining table and tell wild tales about their lives in the Bronx. They taught her how to find her strength—in softness, gentleness, and humor. When Marvel Comics asked Gabby to write the story of America Chavez, their first queer Latina superhero, she proved that heroes could be kind and vulnerable, too. Funny, insightful, and authentic, Gabby inspires young people to live a life that is joyfully open and revolutionary.

“Gabby Rivera's voice is a force—moving, alive, and bursting with feelings”

— Britta Lundin, author of Ship It

Gabby Rivera is a Bronx-born queer Puerto Rican babe on a mission to create the wildest, most fun stories ever. Gabby is the first Latina ever to write for Marvel comics, penning the solo series AMERICA about America Chavez, a portal-punching queer Latina powerhouse.

Gabby’s critically acclaimed debut novel Juliet Takes a Breath was called “f*cking outstanding” by Roxane Gay and was re-published by Penguin Random House in 2019. Mic named it one of the 25 essential books to read for Women’s History Month, and Latina magazine called it the “dopest LGBTQA YA book ever.”

Gabby presented before the United Nations in 2020 as an invited speaker to their Unstereotyping Alliance Conference, and she has collaborated with groups such as the Ford Motor Company, the Makers Women's Conference and Somos Familia, to uplift joyful storytelling and the magic of queer diasporicans everywhere.

In 2022, Gabby became a Sundance Screenwriters Fellow and received an Advancing Justice Award from Catalyst California, alongside activist Dolores Huerta and politician Sheila Kuehl. She currently resides on the West Coast and hosts Joy Uprising, a podcast that brings together her favorite revolutionary humans to honor joy in a chaotic world.

“Gabby was truly sensational. We were stunned by her presentation and overall impact on our community. Students and faculty alike gave her a standing ovation and it was earned in every sense of the word. I have never seen a speaker get that type of reaction. She is stupendous and left the building with an entourage of people following her, crying, asking for her autograph. Everyone should have Gabby come speak. I am so grateful I got to witness her in all her glory.”

“Gabby was inspirational, down-to-earth, and relatable…Her story and presentation were extremely powerful, emotional, and eye-opening. I was personally moved by [her] words. She was very empowering and provided valuable information to understand the LGBTQ community.”

“Gabby was fantastic. We really appreciate her story, and she brought a lot of joy to many folks today.”

To Gabby Rivera, it’s vital to encourage people of all backgrounds to create, daydream, and tell their own stories—and in so doing, open a radical space for creativity. Now, in this affecting talk, Rivera unpacks how she navigates the world as a queer, Latinx, millennial woman; how she incorporates her heritage into her writing; how she strives to be a thoughtful ally for others, and how she celebrates the healing power of community.

This talk about privilege and power asks us: What if this country made everyone—people of all colors, cultures, orientations, abilities, and genders—feel at home? What if the traumas experienced by marginalized peoples could be reconciled and incorporated into a broader, richer definition of America? What if our non-white ancestors weren’t erased, but represented in pop culture and our classrooms? And what if we could show difference as a source of wonder, laughter and celebration, and not as something to fear? With Rivera’s smart, funny talks, we can start making these worlds a reality together.

What brings you joy? Revolutionary author Gabby Rivera loves to ask this question—to her friends, to her writing workshops, to guests on her podcast Joy Uprising—because the answers are so surprising and beautiful. As a queer Latinx woman, she has personally experienced the healing and revolutionary power that comes with stepping into your joy…and now she wants to spread the word.

Gabby says that joy is about more than just happiness: it’s a living, breathing tool that can help you be completely authentic to who you are, giving you “the power to transform yourself and the world around you.” In this inspiring and deeply honest talk, she shows us that joy is already inside us, and invites us to overcome our fear, tap into our vulnerability, and freely express our joy with others. She also wants us to know that joy isn’t about ignoring or extinguishing pain: it’s a way of seeing and feeling that allows us to reckon with the realities of the world—and to change it into a place of truth and beauty.

Gabby’s presentation cuts through cynicism to open our eyes to our potential and the opportunity we all have to build a community practice of joy.

Brené with Gabby Rivera on Superheroes, Storytelling and Joy as Resistance

Adventures in Comics and the Real World

Why Marvel’s America Is the Superhero People Need Right Now

The Power of Seeing Ourselves in Literature