Art is a weapon. Photos can change society—our view of ourselves and our communities. 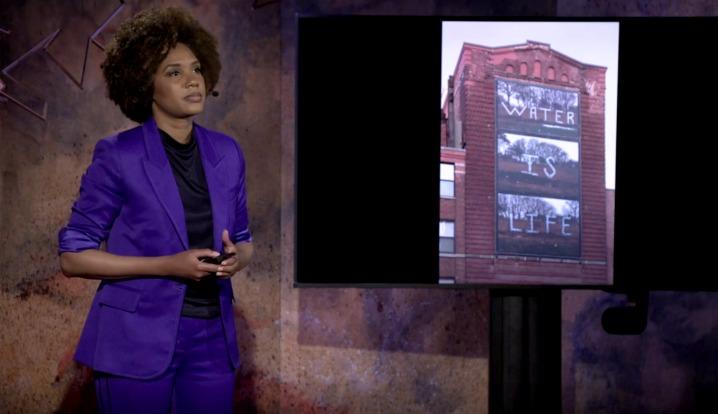 Finding a Creative Solution for the Flint Water Crisis (11:49)

"The Notion of Family" Confronts Racism and Economic Decline

One of the nation’s most acclaimed photographers, LaToya Ruby Frazier’s work depicts the stark reality of today’s America: post-industrial cities riven by poverty, racism, healthcare inequality, and environmental toxicity. By featuring voices and perspectives traditionally erased from the American narrative, MacArthur “Genius” Frazier not only captures our cultural blind spots—she teaches us how art is a powerful tool for social transformation.

“A marriage of art and activism, the artist’s searing photographs reveal the human toll of economic injustice.”

LaToya Ruby Frazier’s extraordinary body of work includes Flint Is Family: a piercing chronicle of the water crisis in Flint, Michigan. Frazier spent five years in a city plagued by poisonous water, documenting the community’s resilience in the face of environmental racism. The original photo essay, for Elle Magazine, was named one of the “25 Most Influential Works of American Protest Art Since World War II” by the New York Times, which called it “a natural extension of her already well-established commitment to social justice.” She collaborated with residents to tell their story and raise funds for a solution, as the project evolved from a photo essay to a video, and now to a 2022 book and exhibition—which celebrate togetherness and family as much as they condemn injustice. Legendary art critic Jerry Saltz calls her “one of the strongest artists to emerge in this country this century.”

Frazier won the prestigious Carnegie Prize for her artwork More Than Conquerors. The monument, called “urgent and resonant” by the Carnegie Museum’s director, reveals the invisible labor of community health workers on the front lines of the Covid-19 pandemic. Previous winners of the Carnegie Prize include Henri Matisse and Pablo Picasso.

Frazier’s recent work includes The Last Cruze, which documents the devastation of a factory town losing its factory. Designed to resemble a production line, the exhibition follows the workers affected by a General Motors plant shutdown in Lordstown, Ohio, after more than half a century of operation. These unflinching photographs of an exploited working class “speak to the imperative to stay together even and especially when driven apart” (Artforum). Frazier also took portraits of Breonna Taylor’s family for the cover story of Vanity Fair. Alongside the latter project, Frazier penned a moving statement about how crucial it was for her to help the family reclaim visual justice by offering humane and dignified representations of Breonna and her loved ones. “My portraits are a call for justice and the unwavering steadfast endurance of Black women in America regardless of the persecution we face on a daily basis,” she wrote.

In her award-winning first book The Notion of Family, Frazier offers a penetrating look at “the legacy of racism and economic decline in America’s small towns.” A haunting photographic account of three generations of Frazier women, the book is simultaneously personal and political: investigating the impact of deindustrialization on working class Black families in the Rust Belt through the “labour-consumed bodies” of her relatives. Her talks, like her breathtaking work, betray a sobering reality: the American dream has not, and does not, work for Black people. As long as environmental injustice, healthcare inequality, and economic racism continue to thrive, the country is failing its Black citizens. With clarity and insight, Frazier shines a light on how art can be used as a tool for transformation and social good across the nation.

In 2020, Frazier was selected as one of nine Storytelling Fellows for National Geographic, where she will complete a year-long project titled ‘Living with Lupus Under COVID-19 in America.’ In it, Frazier will use a personal lens to explore the intersection of racial justice, environmental racism, and the unequal access to medical care in America, as the country faces one of the largest public health crises in modern history. She has received the prestigious MacArthur “Genius” Fellowship and the John Simon Guggenheim Memorial Foundation Fellowship. She was chosen by Ebony as one of their 100+ Most Powerful Women of All Time. Her work has been exhibited widely, with solo exhibitions at the Brooklyn Museum, Seattle Art Museum, the Institute of Contemporary Art in Boston and the Contemporary Arts Museum Houston. Frazier also shot an aerial photography series depicting Memphis, Baltimore, and Chicago in The Atlantic’s Martin Luther King issue, as well as the movie posters for the Grand Prix-winning Spike Lee film BlacKkKlansman, which tells the true story of an American detective who infiltrated the Colorado Springs KKK. Frazier is the Associate Professor, Photography, at School of the Art Institute of Chicago, and has previously held academic and curatorial positions at Yale University School of Art, Rutgers University, and Syracuse University.

“LaToya's lecture was fantastic on all levels. She used her artwork to illustrate a narrative that was engaging and incorporated her personal artistic journey within the broader context of her work. We were very happy that she included the photograph recently acquired by our museum within her lecture. The Q&A at the end of the lecture was inspiring.”

“LaToya was fantastic! So well received and moved so very many people. The fireside chat really allowed us to open the floor for LaToya to speak openly and freely from her own experiences and observations, providing a point of view that many probably have not considered or had an opportunity to hear on their own.”

The Notion of Family Community Resilience in the Face of Injustice

In crises and hardship, how do we come together instead of splitting apart? Award-winning photographer LaToya Ruby Frazier grew up in a town troubled by decades of racism and economic decline—her photography promoted togetherness and family even as it condemned injustice. In her critical, eye-opening photography, she documents communities like hers: facing down crises and inequality, and yet refusing to bend.

In this talk, Frazier shares how she’s seen people rally together and build community, and how we can learn from their example to confront issues of bias and inequality. Environmental racism, housing and healthcare discrimination, social injustice—all these things are too big for us to tackle alone, which is why we need to stand together. Drawing on her ground-breaking social documentary work, Frazier shows us how to build trust and connection so that we can be empowered to take action against injustice.

Each day, we’re bombarded by images: on billboards, on screens, in schools and in our bedrooms. And these images, largely corporate in origin, carry power—power to shape, control, and constrain—even when they offer a fantasy, or an outright lie.

That’s why, as LaToya Ruby Frazier argues, photography is a battleground of representation. We cannot control the material circumstances of our birth, our families or our economic circumstances. But in order to change society—to seed real change and cultural transformation, especially for the marginalized and the forgotten—we must change the picture we have of ourselves and our communities.

In this talk, Frazier discusses how she has used photography to fight injustice—poverty, healthcare and gender inequality, environmental contamination, racism, and more—and create a more representative self-portrait. Drawing from her book The Notion of Family as well as from works of art by Frederick Douglass, August Sander, Julia Margaret Cameron, and Langston Hughes, she relates her conscious approach to photography, opens up more authentic ways to talk about family, inheritance, and place, and celebrates the inspirational, transformative power of images.

In this keynote, LaToya Ruby Frazier discusses the value of collaboration—with individuals, families, and communities—to create a powerful platform for social change. Today, mass media dictates the dominant narrative, often silencing vulnerable communities and perspectives. Parallel realities and experiences can be found across poor and working-class America—urban decay, white flight, economic stagnation, crime, illness, and unraveling civic connections—and these can make for a bleak vision of the country. However, there are ways to engage marginalized groups and individuals to amplify their voices, and come together with renewed agency. With references to art, activism, and grassroots political action, this keynote inspires audiences to use digital technology and storytelling together in order to foster greater empathy, connection, and understanding.

The Notion of Family

The Life Breonna Taylor Lived, in the Words of Her Mother

What Happens to a Factory Town When the Factory Shuts Down?

My Best Shot: Me and My Guardian Angel

The Geography of Oppression

A Black Woman, Steel Worker, and Artist, Through the Eyes of LaToya Ruby Frazier

How To Make Your Photos Matter

The Flesh and the Asphalt, Both Weak

A Tenant Farm for the 21st Century

An award-winning photographer and MacArthur Genius, LaToya travelled to Flint, Michigan to document the community’s struggle against poisoned water and environmental racism. There, she found hope, resilience, and community.

Opening at the Renaissance Society at the University of Chicago, LaToya Ruby Frazier’s “The Last...

“One of the Strongest Artists to Emerge in This Country, This Century.” New York Magazine Lead Art Critic on LaToya Ruby Frazier

LaToya Ruby Frazier—photographer, MacArthur “Genius” and one of Lavin’s most compelling speakers on...

In a New Yorker feature this week: “LATOYA RUBY FRAZIER can capture the decline of an entire...

For LaToya Ruby Frazier, photography shines a spotlight on injustice in contemporary America. Her...