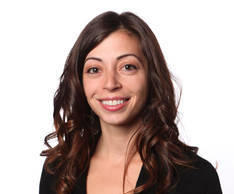 Artist and photographer Naomi Natale is the founding artist behind One Million Bones—a large-scale social arts practice that fuses education and hands-on artmaking to raise awareness of genocide—and the Artistic Director of The Art of Revolution, which uses art to transform public opinion and inspire social change. A TED Senior Fellow, Natale speaks on art and activism, and what one can do for the other.

Naomi Natale wants to bring people closer to the atrocities occurring near and far. As the founder and director of The Cradle Project, her first large scale installation, Natale called attention and raised funds for the 48 million children orphaned in sub-Saharan Africa. Over 550 cradles were created and donated by artists from around the world who were drawn to Natale’s vision. With One Million Bones, Natale and her team collected 1,000,000 handmade bones created by individuals all over the world. In 2013, they installed them on the National Mall in Washington, D.C. to bring attention to the victims of genocide. The short film about the project, also titled One Million Bones, can be found online.

Now the Artistic Director of The Art of Revolution, Natale is working to engage and educate the public, nurture artists and activists, and strengthen social justice movements through art. Her Rhetoric & Revolution program combines film and digital design, creating an arts-based, intermodal social practice that allows participants to understand critical social issues through the lens of famous, historical speeches. Her En la Luz project seeks to create a physical and virtual constellation of Chilean memory to address lingering pain and disconnection over the coup d’état of 1973 and the ensuing 17 years of dictatorship. It is described as a social art practice that uses education, storytelling, and public installation to release silence, spark a public dialogue, and share the experience of 1973 in a new light.

Natale has received numerous awards, including the Robert Rauschenberg Foundation’s Artist as Activist Fellow for 2015 for her project in Chile, the prestigious TED Global Fellowship (2009), and the Professional Achievement Award from the School of Arts and Humanities at Richard Stockton College of New Jersey (2009). Naomi has served as an artist-in-residence at Columbia College of Chicago in 2008, 2010, and 2011. She is currently a TED Senior Fellow and was a 2010 Carl Wilkens Fellow.

“I just wanted to write to say thank you for bringing Naomi Natale here for your daVinci Lecture program. Everyone who had the pleasure of attending her Birke talk or VAC presentation is still talking about their experiences. I believe we will start to see the effects of this exposure to social practice trickle down into our students’ artworks and, hopefully, inspire them to be more conscientious world citizens. I spoke with Don Van Horn, our Dean of the College of Art and Media, and we both felt like we had not seen students this engaged in a long time. I am so pleased that our galleries could be the venue for both of these events.”

The Art of Revolution

Naomi Natale is a social activist who uses art to bring about and inspire social change. She accomplishes this by creating art that engages hundreds and thousands of artists, activists, and children to act on behalf of social causes. In this engaging, visually stunning, and emotionally riveting talk, Natale shares her story: she talks about what brought her to humanitarian work, what she wants to achieve through her art, and urges her audience to find their own artistic way to participate in social justice.

Natale believes that by inspiring action through art, you can change the world, one person at a time. And she leaves her audiences with the tools, the ideas, and plenty of the motivation to do just that.

Critical social movements have always been accompanied by powerful speeches—transformative, often world-changing performances that have inspired generations to make a difference on the local, national, and international stage. In a keynote that combines film, digital design, and historical analysis, Naomi Natale illustrates how a number of famous speeches (by diverse thinkers such as Audre Lorde, Dr. Martin Luther King, Jr., Vaclav Havel, and more) have laid the cornerstones of important social movements. With reference to both well- and lesser-known speeches, fascinating historical insights, and stories from her other large-scale art projects, she shows how art and literature can serve a provocative social function, connect artists to new causes, and motivate the public to far greater civic engagement.

Through the Rhetoric & Revolution program, Natale can also provide a more extensive workshop to help participants find the strength of their own voices and perspectives. Using the Rhetoric & Revolution curriculum designed by The Art of Revolution, participants will learn historical contexts, study themes and issues represented in each speech, and design and perform personal responses from their own passionate convictions.

On September 11, 1973, the elected Chilean government of Salvador Allende was overthrown in a military coup, ushering in the bloody 17-year Pinochet dictatorship: a bitter period of history that sits largely unresolved and unreconciled among Chilean people. For many Chileans, the events surrounding 1973 have meant ongoing silence, painful memories, and an enduring shadow across the country.

Today, with the art project En la Luz (“In the Light”), Chileans are being invited to gather, share their stories, and record short videos of their memories. These transmissions are collected as part of the En la Luz online installation—a permanent memory bank, organized to help future generations understand Chilean history through the voices of those who lived it. In September 2016, these memories will be written on paper lanterns—representing the earth, water, and sky—which will be lit, set afloat, and released, creating a constellation of Chilean memory.

In this keynote, Natale describes her ongoing efforts to bring people together through language, symbols, ideas, and shared experiences. Drawing upon her extensive experience working with large-scale installations and collaborative projects, and working at the intersection of art and social change, she shows how digital storytelling can help diverse groups let go of long-held silences, or else share difficult histories—both in specific instances (like Chile) and in a multitude of other contexts. A more hands-on workshop is also available for groups interested in participating in the En la Luz project in a more direct way.

The Art of Revolution