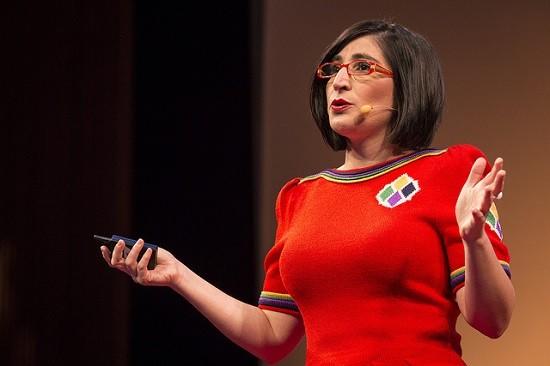 A Highly Scientific Taxonomy of Haters

The Secret History of Muslims in America

Negin Farsad is at the forefront of social justice comedy—a field that she insists totally exists (or should). A TED Senior Fellow and author of How to Make White People Laugh, Farsad is one of few Iranian-American Muslim female filmmakers to use humor—ridiculous humor—to bridge the racial, religious, social, and immigrant gap. The Wall Street Journal calls her work “smart, funny, and fascinating.”

“Farsad's fresh and funny voice is perfect for presenting tactics to fight anti-Muslim sentiment in the U.S., and her work is intriguing and enjoyable to read.”

In her feature film, The Muslims Are Coming!, Negin Farsad took a group of Muslim-American comedians on the road in Middle America to do shows, meet the locals, and counter Islamophobia through jokes. The film features Jon Stewart, Lewis Black, Janeane Garofalo, David Cross, and Rachel Maddow, to name a few, and won a humanitarian award from the Arab-American Institute. Farsad’s first book, How to Make White People Laugh, was called “frank & hilarious” by Salon, while the Austin Chronicle calls her a “master humorist who is equal parts academic and amusing.” The hilarious memoir-comedy-manifesto was nominated for a Thurber Prize for Humor (published by Grand Central/Hachette). She continues some of the themes in her book on the podcast Fake the Nation, a political comedy roundtable that is a Vulture critic’s pick and was nominated for a Webby Award, and in her column for The Progressive —an online magazine championing grassroots politics, human rights, economic justice, and a reinvigorated democracy, among other things. Farsad is a regular panelist for NPR’s weekly current events program Wait Wait... Don't Tell Me! and Neil deGrasse Tyson’s StarTalk.

For Farsad, the social justice thing didn’t come out of the blue. She has a dual Masters in African American Studies and Public Policy from Columbia University’s School of International & Public Affairs, and used to work as a policy advisor for the city of New York, before leaving it behind for a strange life in the arts. Farsad was named one of the 50 Funniest Women by Huffington Post and one of the 10 Best Feminist Comedians by Paste Magazine. She has appeared on Comedy Central’s The Nightly Show, A&E’s Black & White, and various programs such as CNN and MSNBC. Farsad has also written and developed series for MTV, PBS, and Nickelodeon. She wrote, directed, and starred in the 2016 feature release 3rd Street Blackout—a rom-com set in the blackout after Hurricane Sandy and featuring Ed Weeks from The Mindy Project, Janeane Garofalo, and John Hodgman. She also wrote, directed, and produced Nerdcore Rising, a comedy about nerdcore hip-hop that WIRED called “honest and heartfelt,” and which has been an official selection of festivals worldwide, earning Best Film, Best Director, and Audience Favorite awards.

As a standup comedian, Farsad has performed far and wide, from Town Hall on Broadway to the Edinburgh Fringe Festival in Scotland. Her other shows include The Dirty Immigrant Collective, Bootleg Islam, and The Israeli-Palestinian Conflict: a Romantic Comedy. Queen Rania of Jordan commissioned Farsad to make a video as part of a series combating Muslim stereotypes—a series that won the first ever YouTube Visionary Award.

“I just wanted to say thank you for all of your efforts with our speaker event. Negin was wonderful! Her workshop was very informative to students and her keynote was so great! She had the audience engaged and laughing the entire time! We actually had the best turnout that we've had since we have been giving these events. Besides being a talented comedian and speaker, she is extremely sweet and full of personality and style!”

Fighting Islamophobia, Bigotry and What Have You with Comedy

Negin has devoted large parts of her career to social justice comedy, particularly as it relates to Islamophobia, immigrant rights, bigotry and any general lameness foisted on people because of race, religion, socio-economic class, or third arms. These kinds of cultural divides really get her goat! As a policy advisor for the city of New York she worked on the city’s campaign finance initiative, a program that tries to level the playing field for candidates that aren’t made of money. She took that know-how into her comedy with such works as Bootleg Islam—an off-Broadway solo show about a boozy trip to the Islamic Republic of Iran, naturally. She gleaned lessons from her two-person Edinburgh Fringe Festival musical The Israeli-Palestinian Conflict: A Romantic Comedy, not to mention her work with the standup show, The Dirty Immigrant Collective. Her most recent work, the feature documentary The Muslims Are Coming! takes a group of Muslim-American comedians on the road to unlikely stops in generally red states to perform shows, meet locals and dispel Islamophobia through jokes! The film features the likes of Jon Stewart, Rachel Maddow, Lewis Black, David Cross, and Janeane Garofalo among others. But more importantly, the making of this kind of work has given Negin gads—yes gads!—of anecdotes from the frontlines of prejudice AND a prescription for how to change the discourse. She brings real world activist comedy experience, a dash of comedy philosophy, and a touch of public policy for an engaging and definitely hilarious look at the issues. Here’s a good start: make white people laugh. Oh you want to hear more, do you? She’ll just have to highjack powerpoint and bring it to your campus.

Negin Farsad is an accomplished comedian, writer, and filmmaker. How does a casually ethnic lady get into this business and stay in it long enough to drop the day job? With a 180 degree turn in career, not too long ago, Negin knows exactly what the pitfalls are, how to avoid them, and how to make a living in an industry that A) not only has a monetization problem (summed up by “the internet”) but B) is extremely dude heavy with only 8% of above the line functions going to women. Navigating the terrain is difficult and school programs—rightly focused as they are on craft and technique—often miss the boat on how to actually start a career in comedy and/or media. Because Negin has won various director awards, has written/directed for umpteen networks like Comedy Central, MTV, Nickelodeon, IFC, BBC, PBS and others, and has made three feature films, she is uniquely qualified to talk about the nuts and bolts of The Industry. Getting jobs, raising money to make movies, maintaining sanity, etc. She also managed to do all of that while having a vagina—which statistically is really impressive—so she can speak to the particular challenges faced by female graduates entering the work force.

How to Make White People Laugh

Comedy in The Trump Era

When a comedian realized she could fight Islamophobia

When 300 People Told Me I Was Fat and Ugly

I’m an Iranian American and I Used to Feel Black

This Is What the TED Conference Is Actually Like

This May, TED Senior Fellow, comedian, and filmmaker Negin Farsad adds another title to her list of...

TED Senior Fellow Negin Farsad has made Paper magazine’s “10 Feminist Comedians You Should Be Paying...

Social justice comedian Negin Farsad uses humor to talk about serious issues. In a video for the...

"Something we could learn from the gay community's leaps and bounds in civil rights in the last...

“After September 11, being Muslim almost became an accusation,” comedian and diversity speaker Negin...