All children deserve access to a free, world-class education.

Assistant Professor at the Kellogg School of Management | Speaker on Grit 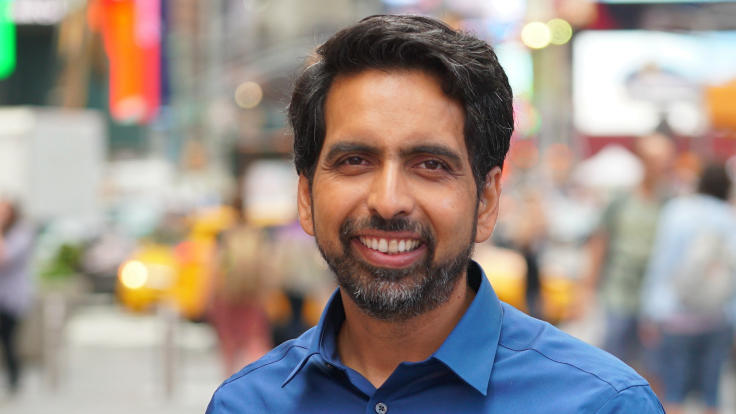 TED: An Update to the Khan Academy’s Mission

As Founder and CEO of the nonprofit Khan Academy, Sal Khan seeks to remove the barriers to education that leave over 600 million children lacking basic math and reading skills. His free, world-class curriculum—available to anyone, anywhere—has made a massive impact, with the academy’s videos reaching over a billion views. In talks, Khan shares how we can revolutionize education with technology, open interaction, and a personalized approach to learning.

“I discovered Sal Khan and Khan Academy like most other people—by using these incredible tools with my own kids. Sal Khan’s vision and energy for how technology could fundamentally transform education is contagious. He’s a true pioneer in integrating technology and learning.”

Recognized for his incredible influence in the field of education, Sal Khan has been profiled by 60 Minutes, featured on the cover of Forbes, and named one of TIME’s 100 Most Influential People in the World. His passion project, the Khan Academy, started humbly when he began tutoring his cousins and a few family friends in math. Soon, word spread, demand grew, and the Khan Academy was born. Today, the platform has more than 62 million registered users across 190 countries, each able to access practice exercises, instructional videos, and a personalized dashboard to help students learn at their own pace. Boasting a state-of-the-art, adaptive technology, Khan Academy has partnered with world-class institutions such as NASA, New York’s Museum of Modern Art, and MIT. The technology has had a reported meaningful impact for students attending top schools such as Stanford, Princeton, and Yale, especially those who are first-generation college students.

In his book, The One World Schoolhouse, praised by both Bill Gates and Al Gore, Khan outlines his vision for the future of education: liberating teachers from mandated curriculums and encouraging human interaction in classrooms. The ideas in One World are the basis for Khan Lab School, an independent off-shoot of the Khan Academy, that offers a collaborative, project-based learning approach to a mixed-age student group.

Khan holds three degrees from MIT and an MBA from Harvard Business School. While at MIT, he taught MCAT prep courses and was named Teacher of the year by a national prep test company.

“Terrific and inspiring indeed. It had been a couple of years since I had seen Salman speak, and his sense of humor was better than ever. He got a standing ovation, and many people wanted to come up and say hello and thank him. As always, he was incredibly gracious and lovely to work with. I look forward to the next one.”

Join Sal Khan as he tells the inspiring story of how he founded the not-for-profit Khan Academy and how the organization is educating millions of people worldwide. With over 150,000 practice problems and 52 million registered students in 190 countries, Khan Academy is rethinking the world of education. Khan will also share his thoughts on what education reimagined could look like and how his dream of providing a free, world-class education for anyone, anywhere could become a reality.

The One World Schoolhouse

Take a look inside the ultimate school

One Man, One Computer, 10 Million Students: How Khan Academy Is Reinventing Education

How Khan Academy Is Changing the Rules of Education

This week, in “The Tech Elite’s Quest to Reinvent School in Its Own Image,” WIRED writes an in-depth...

Personal Finance: Salman Khan In A New Ad For The Khan Academy [VIDEO]

Salman Khan, an education speaker and founder of The Khan Academy, has helped millions of people...

A New Learning Model: Why Salman Khan Is "A True Education Pioneer"

Is it possible to totally rethink our current education model? “My argument is yes,” education...

How can teachers wipe that bored and confused look off students' faces this coming school year?...

Bill Gates has always been an advocate of Salman Khan's tech-savvy approach to learning. Recently,...

Education speaker Salman Khan, founder of the Khan Academy, recently traveled to his alma mater to...

As education speaker Salman Khan has proven, YouTube can be used for much more than watching "cats...

If education is a crucial factor in ensuring the youth of today are empowered to create meaningful...

Education speaker Salman Khan has helped millions of people brush up on their learning with his...

"Instead of holding fixed how long you have to learn something, when you learn it, and the variable...

As education speaker Salman Khan tells Charlie Rose, we don't only have a skills gap in the...

Beyond The Classroom: Education Speaker Salman Khan In Fast Company

While there's something to be said for tradition, education speaker Salman Khan tells Fast Company...

Take Ownership Of Your Education: Salman Khan In Psychology Today

Education speaker Salman Khan has received a lot of press—and an equal amount of praise—for the...

A 1,000% Return: Education Speaker Salman Khan On The Cover of Forbes

"The numbers get really crazy when you look at the impact per dollar," education speaker Salman Khan...

Who is "the coolest person in America today," according to Walter Isaacson? Why it's education...

When Eric Schmidt is praising your accomplishments, you're doing something right. Education speaker...

A recent Time magazine article on education speaker Salman Khan reveals his plan to “flip” the...

Last month, we were in the audience in Toronto’s TIFF Lightbox building as Salman Khan spoke about...

This month, 60 Minutes ran an inspiring feature on why Salman Khan—founder of Khan Academy—decided...

Salman Khan: Changing Education, One Online Video at a Time

Lavin’s newest speaker is Salman Khan—a man Fast Company says is "on a path to become a central...