Your data, your reputation, your customers’ trust: it’s all on the line in the new age of cybersecurity.

Director of Cyberspace and Digital Policy at Council on Foreign Relations

Founder of the 10th Largest Brewery in the World, Co-Star of CBC’s Dragons’ Den 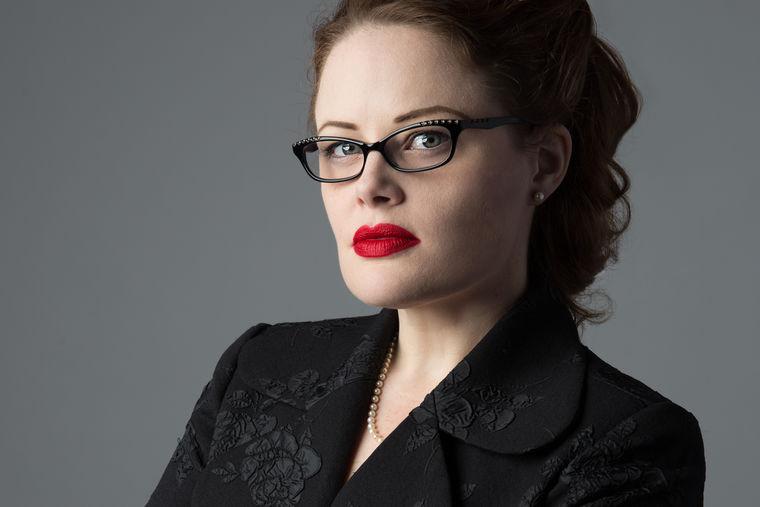 On Social Responsibility and the Future of Technology (21:50)

How to Prevent Mass Information Warfare (1:46)

Why Artificial Intelligence Helps—and Hurts Us (2:50)

Make a Great First Impression. Learn How to Shake Hands. (5:30)

Cybersecurity attacks are doubling every year. Phishing scams are at an all-time high. These days, it isn’t an IT flunky answering for security breaches, it’s CEOs and business owners—non-tech professionals who need clear, actionable guides and information on how to secure themselves and protect their customer’s data. Enter Tarah Wheeler: one of America’s leading cybersecurity experts, as well as lead writer of Women in Tech—called “the essential handbook for women in technology” by Library Journal.

Tarah Wheeler is a global leader in keeping private citizens and corporations safe from cyber attacks. She is a International Security Fellow at New America, a Belfer Cybersecurity Fellow at Harvard University’s Kennedy School of Government, leading an international cybersecurity capacity building project; a contributing cybersecurity expert for The Washington Post; and a Foreign Policy contributor on cyber warfare. Most recently, Wheeler was selected for the prestigious Fulbright Cyber Security Scholar Award. Under the scholarship, she will conduct research at Oxford University, in conjunction with the UK National Health Service, on defining cyber war crimes and mitigating the harms civilians face in nation-state sponsored cyberattacks.

Previously, Wheeler was the cybersecurity czar at Symantec—one of the world’s top cybersecurity firms, and the Head of Offensive Security & Technical Data Privacy at Splunk. She has also led projects at Microsoft Game Studios, including the iconic video game franchise Halo. Once named the top female cybersecurity influencer in the world by Onalytica, Wheeler is also a serial entrepreneur: she is an advisory board member for the Electronic Frontier Foundation, a board of directors member at several cybersecurity companies, and is also the author of the #1 Amazon career guide bestseller Women in Tech: Take Your Career to The Next Level with Practical Advice and Inspiring Stories, which has topped the #1 Amazon bestseller lists in career guides, women in business, and technology nonfiction.

Wheeler holds an MSc from Portland State University, and is a Certified Information Systems Security Professional (CISSP), a Certified Scrum Master (CSM), and a Certified Scrum Developer (CSD). She is also a pre-candidate for a PhD in Complex Systems and Political Science from the University of Michigan and a National Science Foundation Fellow. A Texas holdem poker player, she acquired her startup funds by cleaning out poker rooms in the Northwest and Las Vegas.

“Tarah was an absolute hit! The audience loved her.”

“We wanted to thank you once again for delivering what is being called the best PASS Summit keynote ever. The entire conference was buzzing with excitement and conversation following your presentation. It was beyond thought provoking!”

“Tarah was absolutely terrific. The dimensions of her presentation were very well received: she touched on some leadership and management techniques in times of cyber volatility and it went over very well.”

The Ever-Evolving Threat Protecting Your Organization Against Ransomware

Ransomware attacks are constantly evolving and growing increasingly prevalent—so much so that governments, organizations, and entire industries are scrambling to keep up. It's easy to fault someone who unwittingly clicks on a link, says cybersecurity expert Tarah Wheeler. But what people don't realize is how vast and systematic this issue is. You're facing opponents who are highly sophisticated, developing and planting malware that can easily bypass network security undetected.

In her work at Symantec, Splunk, and Harvard, as well as her Fulbright Cybersecurity Scholar residence at Oxford, Wheeler explored the very real, human toll of such cyber crimes on the population. With deep compassion and years of expertise, Wheeler's latest presentation helps protect companies against devastating attacks and the years of consequences that could follow them. She'll help individuals understand the risks and take personal responsibility for security—especially during the shift to the hybrid workplace—as well as teach them how to advocate and uplift their organization as a group. Beyond up-to-date operating systems and IT infrastructure, an informed and well-prepared team is the best defense against the growing, and very serious, threat of ransomware attacks.

Before the pandemic, companies were reluctant to allow their employees to work remotely, fearing that sensitive data would be compromised without the physical location of the office. Today, remote data access has made leaps and bounds thanks to COVID-19—but somehow, the concept of security didn't keep up. The pandemic didn’t change the need for employees to access secure and sensitive data; but it did force them into their homes, armed with company laptops and unstable Wi-Fi connections, shared among kids and spouses.
Unfortunately, since COVID began, spearfishing and business intelligence theft has also increased multi-fold, and recent cyber attacks have cost companies millions of dollars. Given the current situation, transitioning skilled employees to security awareness has never been more difficult or more timely. How can we effectively prepare our employees now that data can no longer be secured through the office, but instead must be left to the good graces of our home Internet?
Internationally renowned cyber operations expert Tarah Wheeler is here to help. Mobility is part of modernity, says Wheeler. Remote work isn’t going anywhere, so it’s imperative that we learn how to properly secure employee data and company laptops at home—which means investing in our people and teaching them how to be personally secure. For every expert who knows the right way to do things, there are a dozen people to whom this is brand new information. Wheeler has a deep knowledge and expertise of the security challenges employees don’t even know they’re facing yet. In this talk, she shares the ins-and-outs of cybersecurity since both the cloud revolution and the telecommuting transition began—ensuring we can all confidently become good stewards of company data in the age of remote work.
Cybersecurity

The Future Of Cyberwar Defending Your Organization In The Fifth Battleground

Business is now on the frontlines of cyberwarfare. More than just the threat of hackers, companies have to worry about how nation-state conflicts might affect them—from cyberespionage groups out to steal their intellectual property, to targeted attacks aimed at shutting down critical nation infrastructures. For example, in 2017, theWannaCry attacks shut down computers in more than 80 NHS organizations throughout England, resulting in over 20,000 appointments cancelled, 600 GP surgeries forced to return to pen and paper, and 5 hospitals that resorted to diverting ambulances because they were unable to handle their emergency case load. Incidences like this, as well as Denmark’s NotPetya attack—at the time dubbed the “Most Devastating Cyberattack in History” by WIRED—have cost companies billions of dollars, as they become the collateral victims in state conflict.
So, how do you prioritize your information security budget when you’re no longer only concerned about hackers, but about nation-state attacks as well? In this talk, Tarah Wheeler—newly appointed the US/UK Fulbright Scholar in Cyber Security—shows leaders and organizations how to develop an effective threat model and understand their lines of defense. As cyberattacks from foreign governments continue to increase, it’s imperative that businesses learn how to defend themselves, take proactive action, and recognize their larger place in the world’s growing, complex technical ecosystem. This talk helps them do just that.
STEM

Despite various noble initiatives designed to inspire girls to seek careers in the STEM fields, women are still vastly outnumbered by men—and the disparity is only getting worse. To Tarah Wheeler, women don’t need more inspiration—they already love science! But they do need help dismantling widespread and insidious discrimination: forces that mean ‘diversity’ looks like one token woman amid scores of men; that mean women make much less than their male peers; and that ensure they rarely ascend to the same level of influence.

This isn’t the result of some conspiracy, Tarah Wheeler argues—rather, it’s a larger problem of unconscious social biases that companies rarely confront, and can barely resolve, beyond the safest initiatives. So, in this large-hearted, emboldening talk, Wheeler shows students, professionals, associations, and companies how to fight for meaningful gender equality at work. For women in particular, she outlines tools to succeed where it counts the most: the paycheck. With advice on salary negotiation, when to change careers, how to mentor others or start a business, balance family matters, and even how to best format resumes or ace interviews, Wheeler lays out practical advice for anyone, no matter where they are on the corporate ladder. And, with stories from her own successful career, she explains the many doors in and out of tech: how those in marketing, art, programming, English, mathematics and more can find meaningful work in an enormous industry.

It’s time to stop watching women get sidelined, stuck, or overlooked in tech, and time to let them bring their wealth of creativity and innovation to the field—at all levels of influence.

Should ransomware payments be banned?

The Cybersecurity 202: Not just about the nukes: Biden's opening moves with Russia elevate cybersecurity issues

Ahead of face-to-face meeting, Biden and Putin remain far apart on the facts

Where are the women in cybersecurity leadership roles?

NATO, We Want to Go to War With You

When it's democracy, not hackers, that crashes election websites

Women in tech: A strategy for change

In Cyberwar, There Are No Rules

Meet the Woman Writing the Book on Women in Technology

On How Women Can Start Owning Tech

In her mission to create a safe and secure Internet for everyone, cybersecurity expert Tarah...

Could the Future Have 3 Internets? Cybersecurity Expert Tarah Wheeler Weighs in on Bloomberg

“These days, warfare is conducted on land, by sea, in the air, across space, and now in the fifth...

Cybersecurity is Everyone’s Problem. Tarah Wheeler Equips You With the Tools and Information You Need to Protect Yourself.

Cybersecurity attacks are doubling every year. Phishing scams are at an all-time high. These days,...

From Halo to Hacking: New Speaker and Cybersecurity Expert Tarah Wheeler Is Leading the Charge for Women in Tech

Cybersecurity seems like someone else’s problem—until it’s yours. To Lavin’s latest speaker, Tarah...