Embracing joy is an act of resistance, power, and creativity. 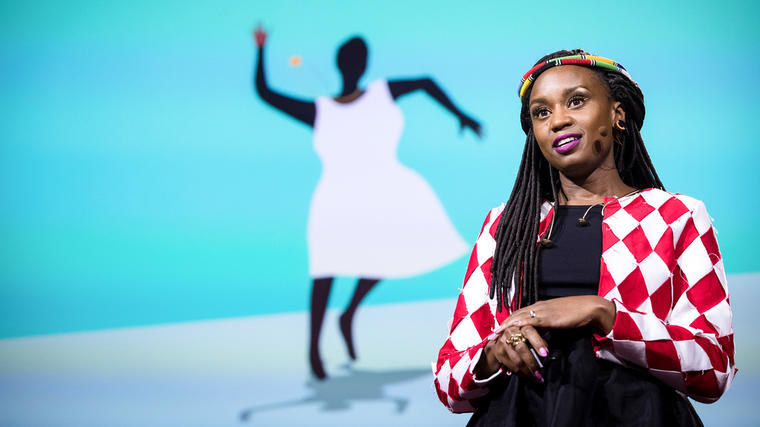 The Power of Images to Empower Their Subjects (3;55)

We all wish we could have more joy in our lives. But filmmaker Wanuri Kahiu says we already have joy, even if we don’t realize it—and if we can tap into it, we can use all our emotions to live a fulfilling life. Kahiu’s acclaimed projects include the award-winning film Rafiki, Netflix’s Look Both Ways, and the forthcoming Hulu series Washington Black. AfroBubbleGum—the genre of “fun, fierce, and frivolous” African art that Kahiu pioneered and presented at TED—proves that creating joyous art is a political and revolutionary act. “Searching for joy in a space that feels like it’s trying to suffocate or kill you is the ultimate act of resistance,” she says.

“When I present my work somewhere, someone will always ask, "What's so important about it? How does it deal with real African issues like war, poverty, devastation or AIDS?" And it doesn't...It's just fun, fierce and frivolous.”

“My work is about Nairobi pop bands that want to go to space or about seven-foot-tall robots that fall in love. It’s nothing incredibly important. It’s just fun,” says filmmaker Wanuri Kahiu. And that particular, necessary attention to fun has landed her some amazing new projects—like teaming up with Stranger Things star Millie Bobby Brown to adapt and direct the celebrated YA novel The Thing About Jellyfish as a feature film, produced by Reese Witherspoon. She directed Look Both Ways, a Netflix romantic comedy-drama. And she’s a director for Hulu’s forthcoming series Washington Black, starring Ernest Kingsley Jr. and Black Panther’s Sterling K. Brown. Based on the award-winning book of the same name by Esi Edugyan, Washington Black is an epic fantasy and historical tale that touches on themes of perseverance, love, and freedom.

In her vibrant, optimistic talks, Kahiu explains why showing fun is a political act in African film, when happiness is so often seen as a privilege. It’s important to find this balance in representing African stories, she says. We’re so used to narratives out of Africa being about poverty, war and devastation. Kahiu asks us to rethink the value of “all that is unserious,” and to make and support art that captures the full range of human experiences.

Kahiu has also spoken about the power of imagination at Facebook and run a TED course on the same topic. She shows us how we can ignite imagination and take advantage of it for leadership and collaboration. She changes the way we look at success, challenging us to envision a version of fulfillment that doesn’t rely on a specific end-goal but on the path we take to get there.

Kahiu is the co-founder of AFROBUBBLEGUM, a media company that creates “fun, fierce and frivolous African art.” Her second feature film, Rafiki, was selected for the 2018 Cannes Film Festival, where it screened to acclaim. In 2019, it won both Best Achievement in Editing, and Best Film in an African Language, at the Africa Movies Academy Awards. She produced the TV documentary For Our Land about Nobel Peace Prize Laureate Professor Wangari Maathai for MNET, a pan-African cable station. Her science-fiction short Pumzi premiered at Sundance, and won Best Short Film at Cannes. Her first feature film, From a Whisper, based on the real events surrounding the 1998 twin bombings of U.S. Embassies in Kenya and Tanzania, won five awards at the African Movie Academy Awards, including Best Director and Best Screenplay. In 2019, Kahiu was named one of TIME’s “100 Next”, the magazine’s inaugural list putting a spotlight on rising stars shaping the future.

We’re so used to narratives out of Africa being about war, poverty and devastation, says filmmaker Wanuri Kahiu. What happens when we disrupt the expected narratives with stories of fun, whimsy, and romance? In this wonderfully buoyant talk, Kahiu introduces her self-invented genre of “AfroBubbleGum”—African art that’s vibrant, lighthearted, and pointedly without a political agenda. As she explains, showing characters who are happy, in love, financially stable, and healthy is an irreverent way of telling African stories, by virtue of how infrequently they are told.
“Fun is political, because imagine if we have images of Africans who were vibrant and loving and thriving and living a beautiful, vibrant life,” she says. “What would we think of ourselves then? Would we think that maybe we’re worthy of more happiness? Would we think of our shared humanity through our shared joy?” Drawing on her love of science fiction and pop culture, Kahiu will show your audience why it is important to go against the grain to tell stories that complement, and sometimes even contradict the conventional stories we tell. If we do that—rethink the value of all that is “unserious”—we can learn to capture and see the full range of human experiences, in art, and in each other.
Corporate Culture

Joy at Work Harnessing the Power of Imagination for Creativity, Productivity, and Purpose

Joy has a transformative power—not only at home, but also at work. Tapping into joy can make your workplace more collaborative, more productive, and more creative. But how do we actually go about including joy in our everyday working lives? Award-winning filmmaker Wanuri Kahiu knows how—and she’ll show you practical ways to realize your joy and find fulfilment at work.
Drawing on the TED course she ran on joy and imagination, Kahiu proves that joy isn’t just important, it’s essential to building a meaningful workplace. She shows how you can create a lifestyle with joy at its core, and use the power of imagination to live your best life. Her talks are clear and outcome-based, with practical steps and exercises you can take today—personally or as a team—to make your organization more joyful, more productive, and more meaningful. You’ll walk away equipped to harness the power of joy and imagination in the office and everywhere else.

Meet the Director Suing the Government That Banned Her Lesbian Romance

Science Fiction Has Ancient Roots in Africa. Why Shouldn’t It Also Have a Future There?

Kenyan Director Wanuri Kahiu on Her Once-Banned Film ‘Rafiki’: ‘I Know That I’m Created to Work’

Acclaimed Rafiki Director Wanuri Kahiu to Direct The Black Kids, Based on Hotly Anticipated YA Novel

The Gotham Group recently announced their latest film project, The Black Kids, and it’s set to be...

The inaugural TIME “100 Next” list was announced today. Honoring rising stars who are “eager to...

Wanuri Kahiu’s award-winning feature film, RAFIKI, will be screened in Kenyan High Court—one of the...

“When I present my work somewhere, someone will always ask, ‘How does it deal with real African...