Beauty is survival, not distraction—a way of fighting, a reason to fight. 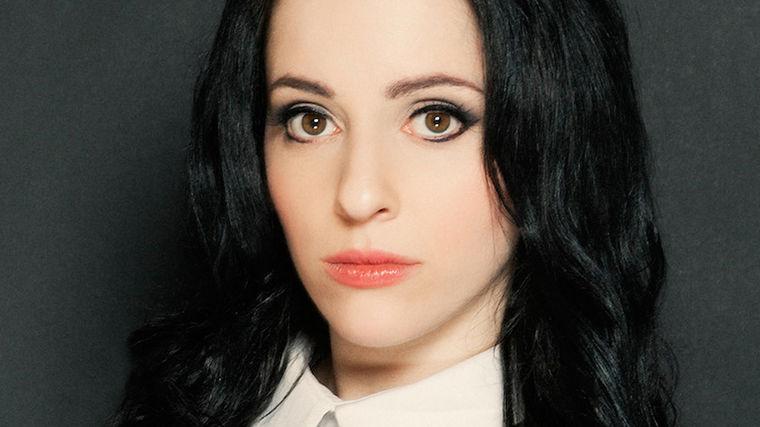 Change Happens When Art is Accessible to Everyone

A Message from the Future with Alexandria Ocasio-Cortez

A Message from the Future II: The Years of Repair

Can Art Change the World?

Drawing the Uncomfortable Elephant in the Room

How Can Art Report the News?

Molly Crapapple is an artist, activist, and award-winning reporter battling injustice with both words and images. Equal parts haunting and gorgeous, her artwork has been used to illuminate some of the most pressing, heart-wrenching issues of our time: She illustrated essential workers who could not stay home during the pandemic; teamed up with congresswoman Alexandria Ocasio-Cortez on an Emmy-nominated short on the Green New Deal; and worked alongside Jay-Z on an animated film condemning the failed war on drugs. In her electrifying talks, Crabapple shows how we can shift the narratives found in traditional media to find our common humanity.

“In a few short years, Molly Crabapple has proved to be one of the most determined and effective political artists working in these sorry times. I wish there were a hundred or even two or three like her.”

There is no easy way to sum up Molly Crabapple’s career. Her projects range from reporting on the inhumane conditions of immigrant labour camps in Abhu Dhabi, to capturing New York City before and after the onset of the pandemic, to collaborating with Marey Carey on her rhapsodic “Save the Day” music video—paying homage to prominent Black figures such as Breonna Taylor and Frederick Douglass. Crabapple has travelled the world; to Syria, Lebanon, Turkey, The United Arab Emirates, Spain, and Greece, documenting life amidst war and violence with her pen and brush. She was shortlisted for a Frontline Print Journalism Award for her internationally acclaimed reporting on Guantanamo Bay—and her work on the aftermath of Hurricane Maria in Puerto Rico was equally gripping. Fierce and courageous, Crabapple makes visible the things we might not want to see: riot-torn cities, the torment and misery of war, and human suffering on a grand scale. But she also helps us envision a new world: in the sequel to the Emmy-nominated short “A Message from the Future with Alexandra Ocasio-Cortez,” Crabapple illustrates a future where 2020 is a historic turning point; “where the lessons of the Covid-19 pandemic and global uprisings against racism drive us to build back a better society in which no one is sacrificed and everyone is essential.”

Recently, Crabapple illustrated the Equal Justice Initiative’s groundbreaking Reconstruction in America—a report which examines how the lawless years following the Civil War helped cement the nation’s future of racial hierarchy and white supremacy. She was also commissioned by The Marshall Project, an journalistic organization dedicated to criminal justice, to illustrate a “The Zo”: an award-winning documentary series detailing the power struggles between incarcerated people and their captors.

Crabapple’s illustrated memoir, Drawing Blood, received rave reviews in The New York Times, The Economist, Die Welt, and many other publications. Her book Brothers of the Gun, long-listed for the National Book Award, saw her collaborate with a Syrian journalist Marwan Hisham to write (and illustrate) his experience of  life under ISIS. The book was named one of the 100 Notable Books of 2018 by The New York Times. Her other published books include Discordia (with Laurie Penny), on the Greek economic crisis, and the art books Devil in the Details and Week in Hell. A contributing editor at VICE, Crabapple’s reportage has been published in the New York Times, New York Review of Books, The Paris Review, Vanity Fair, The Guardian, Rolling Stone, The New Yorker and more.

Crabapple has been called “equal parts Hieronymus Bosch, William S. Burroughs and Cirque du Soleil,” by The Guardian, and “THE artist of our time” by comedian Margaret Cho. She spent four years as the staff artist of The Box, one of the world’s most lavish (and notorious) nightclubs. Crabapple has taken her sketchbook from burlesque halls to refugee camps, always with a skeptical eye for power. She is also the illustrator of Matt Taibbi’s New York Times bestseller The Divide and has collaborated with Spike Jonze, Esperanza Spalding, and Patton Oswalt. She regularly speaks to audiences around the world, at institutions such as The Museum of Modern Art, The London School of Economics, and Harvard and Columbia Universities. Her works are held in the permanent collections of the Museum of Modern Art and The New York Historical Society.

Illustrating Change Art in the Age of Trump

How can art and its associated contexts—including cities, irreverence, beauty, and pluralism—stand against authoritarianism? From Trump to Putin to Erdoğan to Duterte, we are experiencing a global love affair with fascism (and its ringleaders), in which politics are less concerned with facts than emotion and imagery. What role can art play in climates of political repression and populist demagoguery? In this rallying talk, prolific painter and journalist Molly Crabapple asks us to consider art and artists not as apolitical entertainment, but as heralds of truth. Drawing on her experience as an award-winning reporter and illustrator of images that often stand as maps of historical moments, Crabapple’s latest keynote speaks to, and is customizable for, a wide variety of audiences. Incorporating stories of her work with the Occupy movement and reporting on Guantanamo Bay, this talk is for anyone with a hunger to understand our future better; if and how art can affect politics—and the world we'll share for the next four years and beyond.

Community Molly Crabapple on the Connection between Art and Politics

For too long artists have played the role of observer, disconnected from the political activity of the people around them. Is that all an artist can contribute to society? In this personal talk, Molly Crabapple traces her experiences with the Occupy movement and recent Greek protests, describing the twists and turns that informed her political engagement as a visual artist. By combining politics with art, she shows that the place for art isn’t standing to one side of political movements, but marching in the thick of things. She speaks on the direct ways that making art contributes to political movements—by adding the visceral and immediate power of images to the words and ideas that drive political engagement. What’s more, she will help you recognize the opportunity to do more, and make a difference.

The Do-It-Yourself Life What Molly Crabapple Has Learned About Creativity, Art, and Living

We live in an era of flux. The old model of a creator or creative type—a person who does one thing well, and depends on institutions for support—is falling by the wayside. The creator of the future is a super-connected trans-disciplinary mutant: engaged and intellectually rebellious. Molly Crabapple has created everything from Occupy Wall Street posters and arts journalism of collapsing countries to murals on the walls of the world’s most exclusive nightclubs.  On stage, she delivers an energizing, take-no-prisoners talk on how creators—how everyone—can create a life of their own design, without asking permission.

Brothers of the Gun

The Attack on Exarchia, an Anarchist Refuge in Athens

Scenes From an American Tragedy: The Texas Border Crisis

Welcome to to Zo

A Message from the Future with Alexandria Ocasio-Cortez

A Searing Memoir of Life and War in Syria

How Turkey’s Campaign in Afrin Is Stoking Syrian Hatreds

Puerto Rico Sketchbook: The Anarchist Bikers Who Came to Help

Next Generation Leaders: The Journalist Drawing the World

Across the world minds are narrowing. We must fight back.

When anger turns to ink

From burlesque to the front lines, artist Molly Crabapple is “Drawing Blood”

We Must Risk Delight After a Summer Full of Monsters

Rubber Bullets in the Streets of Madrid

The World of a Professional Naked Girl

My arrest at Occupy Wall Street

Diego, Frida, and Me

The Zo is a groundbreaking new video project exploring the twisted realities of prison life,...

On the latest Democracy Now, Molly Crabapple sat down with Amy Goodman and Juan González to discuss...

Want to Do Something Meaningful But Don’t Know Where to Start? Read Molly Crabapple’s Guide to Making a Difference.

Molly Crabapple is one of the most determined and gifted political voices of our time. Her...

"Beauty is a Reason to Fight": Journalist-Artist Molly Crabapple on Summer 2014

In a moving new essay for Vice, artist and writer Molly Crabapple reflects on what she calls "a...

Art speaker Molly Crabapple reminds us that while it has largely disappeared from public discourse,...

Disrupting Convention—One Drawing At A Time: Molly Crabapple, In Vice

"We live in the age of the ubiquitous image," art speaker Molly Crabapple proposes in a telling new...

Molly Crabapple, a reviewer writes in The New Republic, "represents an alternative to the mechanism...

"There’s this idea that it’s great to be a poor artist," art speaker Molly Crabapple scoffs in a new...

Standing Out As An Illustrator: Molly Crabapple In A New PBS Doc [VIDEO]

It's not enough to be able to draw beautiful, competent illustrations anymore. As Molly Crabapple...

Artists Can Be Businesspeople Too: Molly Crabapple [VIDEO]

"To me, business is really about the art of getting things done," Molly Crabapple told us in an...

Making It In The Arts: Molly Crabapple On Being Your Own Boss [VIDEO]

"Everything in the world is conspiring to try to force people into this mold where they work for...

The way an artist becomes successful financially is much different than creatives in other mediums....

Molly Crabapple: Take Control Of Your Own Life To Succeed In The Art World

"I believe in following your dreams, being incredibly passionate, and being ruthlessly practical...

My Week In Hell: How Molly Crabapple Disrupted The Art World [VIDEO]

The Do-It-Yourself Life: Molly Crabapple's Creative Approach To The World

Molly Crabapple—a new Lavin exclusive speaker—is an artist whose work has appeared on CNN, in Vice...