The idea of redemption is always good news, even if it means sacrifice or some difficult times. 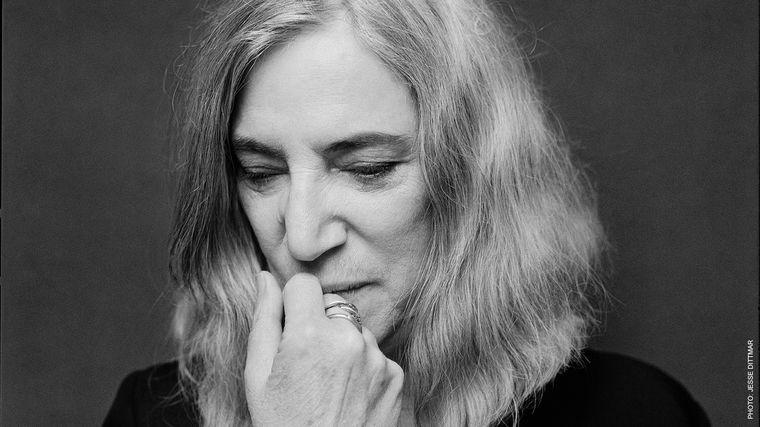 Do People Still Have the Power?

Named one of the most influential people in the world in TIME Magazine’s TIME 100, Patti Smith is a poet, singer, songwriter, photographer, and fine artist. A seminal American artist, Smith has produced a body of work whose influence branches out through generations, across disciplines, and around the world.

Born in Chicago and raised in South Jersey, and emerging in the nascent cultural hotbed of mid-70s New York City, Patti Smith forged a reputation as one of the decade’s first visionary artists—merging poetry and rock in vital new ways. Her 1975 debut album, Horses, is routinely ranked as one of the greatest albums of all time, and has been inducted into the Grammy Hall of Fame and the National Recording Registry at the Library of Congress. In 2007, she was inducted into the Rock n Roll Hall of Fame.

Smith’s many albums include Horses, Radio Ethiopia, Easter, Wave, Dream of Life, Gone Again, Peace and Noise, Gung Ho, Trampin’, Land, Twelve, Banga, and Outside Society. Her song “Because the Night,” co-written with Bruce Springsteen, shot up to number 13 on the Billboard Top 100, and her song “People Have the Power,” cowritten with her late husband Fred “Sonic” Smith, was number 22 on NME magazine’s Singles of the Year. In 2011, Patti Smith was listed amongst the TIME 100 most influential people in the world, as well as one of Rolling Stone’s 100 Greatest Artists. She is a four-time Grammy nominee and a Golden Globe nominee for the song “Mercy Is,” cowritten with Lenny Kay for the film Noah.

In 2010, she won the National Book Award for Non-Fiction for Just Kids, a bestselling memoir about her early days in New York and her deep friendship and collaboration with photographer Robert Mapplethorpe. Just Kids is currently being developed into a TV series for Showtime, with Smith co-writing and producing the show. Her next memoir was M Train: a globe-spanning, exquisite remembrance of places, people, and art—the works and experiences that most informed her singular life. Her book Devotion is “an inspired exploration of the nature of creative invention.” More recently, Smith published Year of the Monkey, a profound, beautifully realized memoir in which dreams and reality are vividly woven into a tapestry of one transformative year in her life.

Smith is also the author of Witt, Babel, Coral Sea, Woolgathering, and Auguries of Innocence. A Book of Days, featuring 365 images and reflections, will be published in November 2022. As a fine artist, Smith has exhibited at galleries and museums worldwide. Represented by the Robert Miller Gallery in New York since 1978, her exhibitions include Strange Messenger, Land 250, and Camera Solo. Steven Sebring’s 2008 documentary about Smith, Patti Smith: Dream of Life, was acknowledged internationally, winning a Sundance Award and receiving an Emmy nomination.

Smith is the recipient of the 2020 PEN America Literary Service Award, honoring her prolific career and unflinching determination to speak truth and protest injustice. She was named a Commandeur des Arts et des Lettres from the French Ministry of Culture and has been awarded honorary doctorates from Rowan State University, Pratt Institute of Art, and the School of Art Institute Chicago. She was also named an Officer of the National Order of the Legion of Honor by decree of the President of the French Republic. She was honored by ASCAP with the Founders Award, representing lifetime achievement, and received Sweden’s Polar Award, an international acknowledgement for significant achievements in music. Smith was also awarded the Katharine Hepburn Medal from Bryn Mawr College, a Medal of Distinction from the Barnard College Board of Trustees, and the Burke Medal for Outstanding Contribution to the Arts from Trinity College, Dublin.

At present Smith writes and performs, lending support for human-rights issues and environmental groups, primarily Pathway to Paris, a nonprofit organization co-founded by her daughter Jesse Paris Smith which offers tangible solutions for combatting global climate crises. She resides in New York City. She is a featured writer on Substack, where her twice-weekly writings and readings can be subscribed to online.

“What a magical evening we had! Patti was so wonderful to work with and the event was incredible. Her conversation was insightful, funny and stimulating, and the music was beautiful and invigorating. Our audience (and I), had such an amazing time. We have done a lot of amazing programs, but this by far has been my favorite. Please pass on our thanks. And thank you for all of your work. I enjoyed working with [Lavin] on this!”

The USC Arts and Humanities Initiative

Year of the Monkey

In her memoir ‘M Train,’ Patti Smith opens up about her life and loves

The legendary musician’s third memoir walks readers through the tumultuous year of 2016, in which...

Legendary musician and Lavin speaker Patti Smith has a new book coming out this fall. The National...

"A writer, or any artist, can’t expect to be embraced by the people, [but] you just keep doing your...

People Have the Power: A Review of Patti Smith at the AGO [PHOTOS]

Last week, Patti Smith performed an amazing show at The Art Gallery of Ontario, where her Camera...

As one of TIME's most influential people in the world, Patti Smith has inspired generations of fans...

Making it in New York City, Then and Now: Patti Smith

If you want to know what it takes for a young artist to “make it” in New York City, look no further...

Patti Smith, the Godmother of Punk, Makes the TIME 100

Patti Smith, one of the most singular American artists of our generation, has been named to the...

The legendary Patti Smith performed last month in New York, where she read from her book Just Kids...

Patti Smith in The Guardian UK: "It Was The Impulse to Write That Led Me to Singing."

In this weekend’s Guardian, Patti Smith opened up on everything from irony to artistic integrity to...

In “The Flag, the Cross, and the Station Wagon,” Bill combines national and personal stories, “arguing wisely that facing the truth about our past is the only way forward to a more just and sustainable future” (Booklist Starred Review).

In “Don’t Trust Your Gut,” Seth proves that we go about making decisions all wrong. He helps us follow the numbers instead of our instincts to make better choices and pursue what really matters.

Past is Prologue: Lavin Welcomes Author and Attorney Michelle Coles

The New York Times journalist tells the true story of a bright young girl growing up in foster care and facing homelessness and poverty, in this decade-in-the-making saga of resilience and hope.