The diversity problem in academic and corporate settings doesn’t just affect minorities—it affects us all. 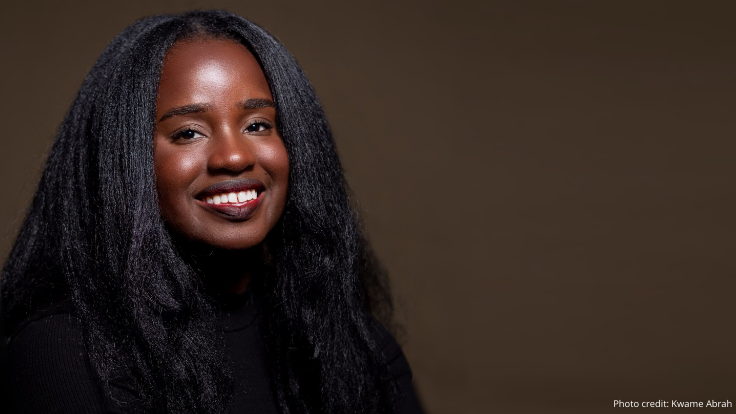 The Overlooked Reasons Behind Return to Office Reluctance (4:01)

How Uplifting Marginalized Communities Uplifts Us All (5:13)

How to Implement the "Black Women Best" Framework (3:11)

Anna Gifty Opoku-Agyeman is the co-founder of the only non-profit organization addressing the pipeline and pathway problem for Black women in fields of economics, finance, and policy. In her book The Black Agenda, Opoku-Agyeman features Black voices across economics, education, health, climate, and technology, all speaking to the question “What’s next?” as it pertains to centering Black people in policy matters in our country. As we collectively reckon with the aftermath of the pandemic, and finally begin to face the deep-rootedness of racism in this country, her work is empowering, exciting, and indispensable for the new world we’re building.

Black Americans not only experienced a disproportionate burden of illness from the pandemic—their financial burden was greater, too. Black women were more likely to be worried about money or fired from their jobs, and Black-owned businesses were more likely to get hit by closures. How we rebuild from this crisis is absolutely crucial for our economic futures, says researcher, writer, and activist Anna Gifty Opoku-Agyeman. “If we want to achieve an inclusive economy that works for all, Black women must have visibility in all things from money to policy to economics. ” In The Black Agenda—the first book of its kind—Opoku-Agyeman brings together exclusively Black scholars and experts for a policy-oriented approach in the fight for racial justice in America. The book has received praise from the likes of New York Times bestselling authors and highly sought-after experts, such as Dr. Ibram X. Kendi, who writes, “This book will challenge what you think is possible by igniting long overdue conversations around how to enact lasting and meaningful change rooted in racial justice.” Chelsea Clinton declares, “The Black Agenda is urgent. It’s urgent that white people recognize that centering, listening to, and being led by the voices in this book are the start to investing in societal solutions.”

Opoku-Agyeman co-founded The Sadie Collective, a non-profit providing Black women, students, and professionals the resources they need to succeed in the fields of qualitative sciences. Under her leadership, the Collective drew wide support from leaders across economics, policy, and industry, including Janet Yellen, current Secretary of the Treasury and the first female Chair of the Federal Reserve. Opoku-Agyeman also often speaks on the role that social justice and anti-Black racism plays in paving the way for the next generation of change-makers. As an alumna of the Meyerhoff Scholars Program, one of the top producers of Black scientists in the country, Opoku-Agyeman understands the experience on a deeply personal level. She is also the brainchild and co-founder of the #BlackBirdersWeek, a global campaign highlighting Black nature enthusiasts and scientists, and her talks within the broader science community emphasize the structural underpinnings of academic institutions and scientific disciplines.

Opoku-Agyeman’s work has been featured in Bloomberg, The Washington Post,  Wall Street Journal, NPR, Forbes, and Newsweek. In 2019, she co-authored a viral New York Times op-ed with Dr. Lisa Cook, a former White House aide for President Barack Obama who later became a member of the Biden-Harris transition team, that focused on the underrepresentation of Black women in economics and related fields. Her expertise in diversity, equity, and inclusion within academia and the workplace is highly sought after by companies and campuses across the country, and she has given talks to organizations such as the Ford Foundation, Stanford University, Harvard University, and The Chicago Federal Reserve Bank. In 2020, Opoku-Agyeman became the youngest recipient for the CEDAW Women’s Rights Award by the UN Convention on the Elimination of all forms of Discrimination Against Women. Previous awardees include Vice President Kamala Harris and House of Representatives Speaker Nancy Pelosi. Opoku-Agyeman is currently a doctoral student studying Public Policy and Economics at the Harvard Kennedy School of Government as well as an alum of UMBC where she received her B.A. in Mathematics and a minor in Economics.

Building Inclusive Workplaces for the Future Rethinking the Corporate Pipeline

As diversity, equity, and inclusion begins to take center stage in corporate America, many organizations are beginning to think critically about how to make the pipeline and pathway more equitable for women and people of color. In her role as a co-founder of a successful pipeline initiative for Black women in economics, finance, and data science, as well as being an alum of several initiatives, Anna Gifty Opoku-Agyeman draws on her extensive, real-world experience to provide insights on what works for talent acquisition, recruitment, and retention—and, perhaps more importantly, what doesn’t.
In this talk, be prepared to hear why data, employee engagement, and senior leadership buy-in can have a strong impact on organizations aiming to be more inclusive. Presented with Opoku-Agyeman’s spirited and enthusiastic style, this session will not only leave audiences feeling inspired—they’ll also be equipped with the tools and frameworks needed to make a lasting difference from within.
Economics

Before the 2008 financial downturn, Black and brown communities were experiencing early signs of declining employment and housing devastation. The trend was noticed by and reported on by minority economists, but unfortunately, their calls for alarm were largely ignored. What followed was a decade-long recession that not only cost millions of people their financial stability for generations, but made it even harder to achieve an inclusive economy for all. Black women were hit the hardest, losing the highest share of jobs compared to other women. Sadly, we haven’t learned from the lessons of the Great Recession, says Anna Gifty Opoku-Agyeman—a researcher studying policy and economics at Harvard Kennedy School.
In this exhilarating, forward-thinking talk, Opoku-Agyeman introduces us to concepts like “Black Women Best” (coined by Janelle Jones, the Managing Policy Director of Groundwork Collaborative). It’s the idea that when Black women, the most marginalized group in the economy, have access to financial freedom and economic opportunity, the system will finally be working for all. Passionate, honest, and funny, Opoku-Agyeman shows us how we can put this idea into practice, and in the process, outlines what the next steps in our pandemic response must be in order to lift ourselves out of economic ruin.
STEM

Shaping The Next Generation of Changemakers Making Academia Work for Everyone

The National Science Foundation recently reported a harrowing fact: the number of Black people pursuing bachelor degrees in STEM fields has steadily declined since 2013—and at the doctoral level, representation can only be described as “abysmal.” Despite a renewed push around diversity in academic and corporate spaces, there remains a lack of regard for minoritized scientists, notes researcher Anna Gifty Opoku-Agyeman, who is an alum of several STEM initiatives such as the Meyerhoff Scholars Program.
We tend to think of science as objective, but in reality, science is informed by our lived experience. And because the lived experience of Black and Brown scientists are so different, it is absolutely invaluable to our broader understanding, says Opoku-Agyeman. “Diversity allows for power to be more evenly distributed among a group of people, and as a result, different stories are given their due diligence,” she writes. In this impassionated talk, Opoku-Agyeman reveals how we can center, celebrate, and cultivate inclusive scholarship—and why we must act on it urgently.

We Analyzed the Comments on the Atrocious “Dr. Jill Biden” Op-Ed

Can Black businesswomen save the US economy?

The Two Women Fixing the Pipeline for Black Female Economists

Why A Lack of Diversity Is Hurting Economics

Economists' Silence on Racism Is 100 Years in the Making

Black women are missing from corporate leadership. The problem begins with the pipeline.