Dreaming big won’t help you if you don’t have the values, dedication, and hard work to back it up.

Leadership Speaker, Educator, and Father of NHL Star P.K. Subban | Author of How We Did It

Host of The Amazing Race Canada and Olympic Gold Medalist 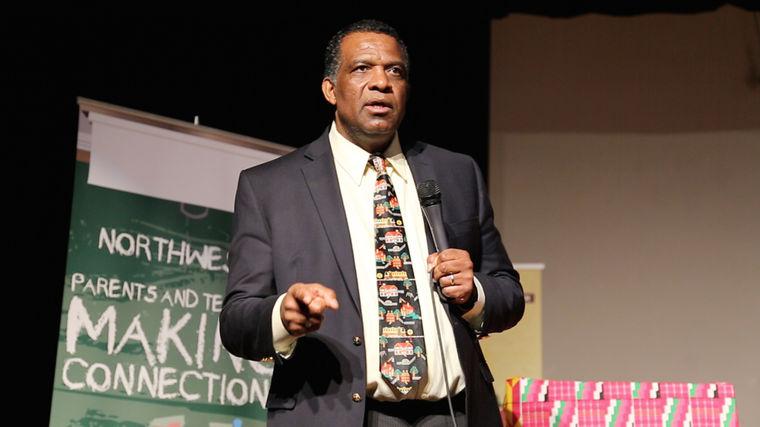 Rely on These Three Pillars to Achieve Your Potential (4:07)

What Happens After You Achieve Your Dream? (2:57)

Karl Subban is the ultimate hockey dad. Despite never playing the sport, the former high school principal and father of five has raised 3 NHL Players. Having dedicated his life to helping others reach their potential, Subban knows the value of hard work, devotion, and sacrifice. And in his powerful talks—as well as his memoir, How We Did It—Subban explores teamwork and leadership through his unique perspective as an educator and the head of a successful hockey family—helping leaders, coaches, and mentors in their quest to shape the next generation.

In his thirty years of coaching, teaching, parenting, and leading, Karl Subban has learned how to inspire people. “Your greatest gift is your potential,” he often says, “and your greatest gift to the world is the development of that potential.” Hailing from the Caribbean, where he never played hockey, Subban has nonetheless raised three NHL players, including the now-Nashville Predators defenceman P.K. Subban—one of the league’s brightest stars and an Olympic Gold Medal winner. His new memoir, How We Did It: The Subban Plan for Success in Hockey, School, and Life has become an immediate, national bestseller. It’s a personal story of a unique journey—a saga that begins in Subban’s original home of Jamaica, explores his achievements as a father and educator in Canada, and stands as a must-read account of one of hockey’s most fascinating families. It’s Subban’s proven approach to resilience, perseverance, and goal-setting—and how to bring the best out of everyone.

As parents, Karl and his wife, Maria, have raised five accomplished children. Their two oldest daughters are teachers, one a record-setting university basketball star and the other an acclaimed visual artist. Each of their three sons, P.K., Malcolm and Jordan, have been drafted and signed by NHL teams.  In 2018, Subban was recognized as a Canadian Men’s Health Foundation Champion for taking a stand for men’s health and supporting CMHF’s mission to inspire men to make small changes and live healthier lives.

The Million Dollar Question Subban is often asked about his family is, “How did you do it?” A natural storyteller, Subban mixes personal stories with lessons he learned as a coach and principal—lessons about motivation, grit, and accomplishment—that resonate with audiences from the boardroom to the classroom.

“This was great for my teachers. He was funny and inspirational. My teachers left with a big smile on their faces and they were motivated for the start of the school year. It was such an honour for us to have him.”

How Did You Do It? Team Subban’s Vision for Success

Wisdom. Humour. Leadership experience. Memorable stories. These are the hallmarks of a Karl Subban keynote. Drawing on his experience as a coach, a principal, and the father of “Team Subban,” Subban talks about vision, perseverance, teamwork, and what it means to lead. He uses pointed anecdotes and powerful metaphors to tell a larger narrative about defining, and achieving, success. As a principal, Subban would often give a room full of students a simple command: “Anyone who wants to be better, raise your hand.” Every hand shot up. That came as no surprise. Who doesn’t want to be better? Everybody wants to be better. The problem, Subban saw, was that too many people didn't think they could be. Since those days, he has held the firmly-rooted belief that anyone can—and everyone should—reach their true potential. To that end, Subban shares a proven framework for success that resonates with everyone from educators to business and community leaders.

How We Did It

The Subban Plan for Success in Hockey, School, and Life

How P.K. Subban’s Dad Prepared Him For the Game of Life

5 things you may not know about Karl Subban

Former school principal Karl Subban understands success in life (and on the ice), with three...

New Videos: Motivation from the Rink to the Boardroom with Karl Subban

Few parents have accomplished what Karl Subban has. All three of his sons—P.K., Malcolm, and Jordan—...

Diverse perspectives in the workplace make your ideas better, your teams stronger, and your company far more successful. Our top diversity, equity, and inclusion speakers don’t just show you how DEI can benefit you—they give you practical strategies for implementing true belonging in the workplace.

The Top 5 Innovation Speakers of 2022

In the fast-paced world of 2022 (and 2023!), innovation has never been more crucial. Our top innovation speakers will show you how to keep ahead of the trends, harness change, and find opportunity — this year and the next.

Lavin is proud to see books written by our exclusive speakers named to so many year-end Best Books lists—including, for a second year running, Amazon’s #1 nonfiction title and a Top 10 New York Times entry.