A master of speculative fiction proves that literature can show us our future—if we look.

One of America's Leading Public Intellectuals 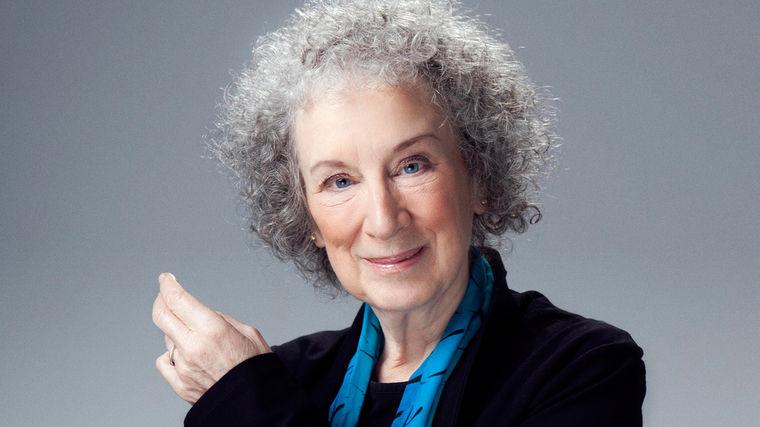 Inspiration, Adaptation, and what The Handmaid's Tale Means in a Post-Trump America (7:42)

How The Handmaid’s Tale Is Becoming More Than Fiction (1:22)

Margaret Atwood has long been a literary titan, but “current events have polished the oracular sheen of her reputation” (The New Yorker). With her 1985 novel The Handmaid’s Tale adapted into a fifteen-time Emmy Award-winning television series, and it’s sequel, The Testaments, winning the 2019 Booker Prize, Atwood’s sharp eye is more crucial—and prescient—than ever.

“With dry, ironic wit, a poetic sensibility and more than a hint of the Gothic, she has uncompromisingly observed the psychology of people in her society.”

“Every totalitarian government on the planet has always taken a very great interest in women’s reproductive rights,” says Margaret Atwood; a disquieting insight at any time, but particularly in today’s portentous political landscape. Just as it did when it was first published, the story of The Handmaid’s Tale—a future where women are treated as property of the state, run by an authoritarian regime—is unearthing chilling patterns to an uneasy public. The book’s long-awaited sequel The Testaments performed so well it broke the record for best first-day sales of any Penguin Random House title that year. Having initially gone to press on the novel for 500,000 copies, the publisher went back twice for more copies in the span of just over a week.

With her work already producing two blockbuster television adaptations—first The Handmaid’s Tale, then Alias Grace—Atwood’s vision is reaching a wider audience than ever before. To date, The Handmaid’s Tale has received 54 Emmy nominations and 15 awards, including Best Drama, and Atwood herself received a standing ovation at the show. Meanwhile, Atwood’s Giller-winning, Booker-shortlisted murder mystery Alias Grace is now streaming on Netflix, and was notably written, produced, and directed by women. But before Atwood was a novelist, and before her work became the subject of award-winning TV, she was a poet. And recently, she released her first poetry collection in over a decade: Dearly. By turns “moving, playful, and wise,” the poems gathered in Dearly explore bodies and minds in transition, while observing the objects and rituals that ground us in the present moment. The Washington Post calls it “hauntingly beautiful, with reflections on life and death, time and chance, and nature and zombies.”

Atwood is the author of more than fifty volumes of poetry, children’s literature, fiction, and non-fiction. She is perhaps best known for her novels, which include The Edible Woman, The Robber Bride, The Blind Assassin, Oryx and Crake, and The Year of the Flood. The Oryx and Crake trilogy, in particular, is being adapted into an HBO TV series by celebrated filmmaker Darren Aronofsky. To date, Atwood’s body of work has been published in more than 40 languages, including Farsi, Japanese, Turkish, Finnish, Korean, Icelandic and Estonian. Atwood has also won many international literary awards, including the prestigious Booker Prize, Arthur C. Clarke Award, Governor General’s Award, the PEN Pinter Prize, the Ivan Sandrof Lifetime Achievement Award from the National Book Critics Circle, and a Guggenheim Fellowship. She was presented with the Companion of Honor award—given for achievements in the arts, literature, science, and politics—by Queen Elizabeth, making Atwood only the third Canadian to receive the honor. Atwood is a founder of the Writers’ Trust of Canada and a founding trustee of the Griffin Poetry Prize. She is also a popular personality on Twitter, with over two million followers.

“Margaret’s keynote set the stage for the subsequent panel discussions that followed in exactly the manner that we hoped would be possible. Her exploration of compassion was multi-layered, witty, and provocative, teasing with both the familiar and surprising ways that compassion shows up in the everyday. Her comments had broad appeal to the many nurses in the audience and to the general public as well. She was simply charming. Our planning team was wholly satisfied that Margaret was a fantastic choice for this event.”

University of Calgary, Faculty of Nursing

An Evening with Margaret Atwood

Margaret Atwood can speak on a wide range of issues relating to literature, social activism, political engagement, the creative process, the artist’s role in society, technology and art, and, of course, her own accomplished body of work. Her pithy observations and witty comments enlighten and challenge audiences to think critically about our relationship to words and language. “The answers you get from literature,” she has said, “depend on the questions you pose.”

The Year of the Flood

How Margaret Atwood became the voice of 2017

Margaret Atwood, the Prophet of Dystopia

The Handmaid's Tale sales boosted by fear of Trump

In Praise of Utopias, Not Dystopias

What's The Next Big Dystopian Novel? Margaret Atwood Has Some Ideas

It's Payback time (the film, that is)

Margaret Atwood Announces Release of Dearly, Her First Poetry Collection in Over a Decade

With winning 2019’s Booker Prize for The Testaments, a successful television series, and a world...

With her newest release, The Testaments, breaking sales records around the globe—and at a record...

The iconic author’s latest release has only been on shelves for one short week, but already it’s...

The Reluctant Prophet: Margaret Atwood Featured in TIME, Long-Listed for the Giller Prize

After an incredible response to its’ first three seasons, Margaret Atwood’s The Handmaid’s Tale is...

The time in your life that you read a book will alter the impact it will have on you. The...

Set 15 years after The Handmaid’s Tale, Margaret Atwood’s sequel, The Testaments, was inspired by...

After the success of The Handmaid’s Tale—Hulu’s most watched show ever, nabbing 13 Emmy nominations...

How Does a 30-Year-Old Novel Become a Runaway Bestseller and Hit TV Show? Margaret Atwood’s The Handmaid’s Tale Rides Again

Wherever you look these days, swaths of red seem to be marking the pages of every major publication...

This week saw the release of Hag-Seed, Margaret Atwood’s modern adaptation of Shakespeare’s The...

The Hogarth Shakespeare Project began in October of last year, and since then, three of the Bard’s...

Literary icon Margaret Atwood is having one of the busiest years of her career. Two of her classics...

From Page to Screen: Margaret Atwood’s The Handmaid’s Tale Hits Hulu in 2017

On Friday, Hulu announced that it will be adapting Margaret Atwood’s seminal 1985 novel The Handmaid...

In the midst of receiving excellent reviews of her latest novel, The Heart Goes Last, Margaret...

A winner of many international literary awards, including the prestigious Booker Prize, Margaret...

We are so pleased to see three books by Lavin speakers appear on the New York Times 100 Notable...

Margaret Atwood "recently published the final installment of a serialized novel about zombies...

Margaret Atwood is at it again. Her most recent project, Fanado, is reinventing the relationship...

If there's anyone equipped to discuss the transition of the written word over time, it's certainly...

"I Dabble In Modernity": Margaret Atwood On Staying Current [VIDEO]

Still Ahead of the Curve: Margaret Atwood Writes an eBook Serial

Judging by her massive Twitter following (over 350,000 followers) and her newly released serial book...

The Many Meanings of Debt: Margaret Atwood's Payback

Margaret Atwood's Massey Lecture-turned-bestselling book, Payback: Debt and the Shadow Side of...

Margaret Atwood’s prescient non-fiction book Payback—a history of debt that was release in 2008 at...

Margaret Atwood on Why People Love Giving Books as Gifts

Author Margaret Atwood needs no introduction. She’s simply one of Canada’s — one of the world’s —...

How cool would it be to play Angry Birds with Margaret Atwood? On Thursday, Amber Mac did just that...

We lost an essential toolkit for solving today’s challenges when most of us left geometry behind in...