In a volatile world, our biggest opportunity lies in revolutionizing our relationship with risk. 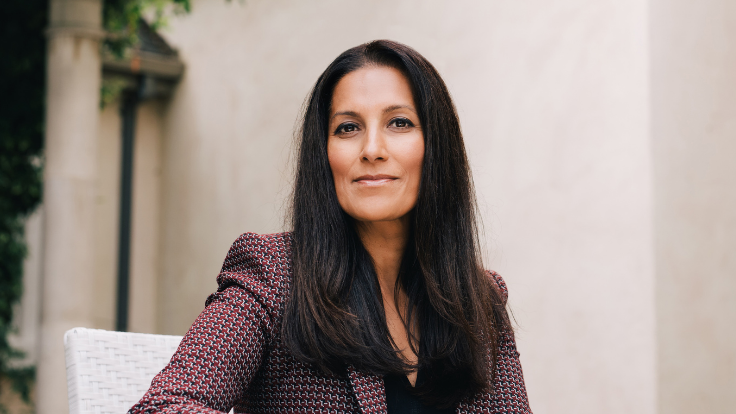 How Should Leaders Choose Their Guide? (2:21)

Why Successful Leaders Need to Know When to Let Go (2:18)

This Simple Act Is Your First Step as an Entrepreneur (3:21)

The Key Principle for Effective Leadership (4:29)

As a Leader, Are You Honest About Your Core Strengths? (3:00)

Sukhinder Singh Cassidy is one of the most well-respected female tech executives in Silicon Valley. Named one of Fast Company’s Most Creative People in Business, she’s served as president of StubHub, helped scale companies like Google and Amazon, and founded theBoardlist: a premium talent marketplace for diverse leaders. But despite her many successes, she’s the first to admit her path hasn’t always been linear. In her new book Choose Possibility, Singh Cassidy reveals the many poor choices, misfires, and unexpected headwinds she’s encountered along her path—providing a thoughtful new perspective on risk-taking: what it is, what it isn’t, and how to master it to achieve lasting success.

“Sukhinder is one of Google and Silicon Valley’s most successful and well-respected leaders. In Choose Possibility, she brings her unique style of authenticity, optimism, and hustle to help anyone unlock their career potential.”

Life is made up of a series of choices. But what do you do if one of those choices turns out poorly, even though it was carefully considered? How do you trust your decision-making skills to make the next right choice? And how do you continue to take risks, not once but many times? In her book Choose Possibility: Take Risks and Thrive (Even When You Fail), Sukhinder Singh Cassidy shares more than the highlight reel. With candor and honesty, she admits how the wrong turns she made along the way turned into some of the most valuable lessons and opportunities for success. Many of us live under the fallacy that if we make one big, daring risk, we will achieve either success or failure. It’s exactly this impression of risk that increases the likelihood that people will just stay put, says Singh Cassidy. In Choose Possibility, she debunks this myth, along with many others, proving that long-term success doesn’t come from making a singular “right” choice, but the willingness to face risk repeatedly. If the pandemic has taught us anything, it’s that, in an increasingly volatile world, risk is unavoidable. Singh Cassidy’s engaging talks offer us a new, revolutionary framework for risk-taking: one that is not linear, leaves room for failure, and still gives us outsized returns over time. Susan Wojcicki, the CEO of YouTube, declares, “Choose Possibility helps us see risk in an entirely new way. Sukhinder Singh Cassidy will inspire you to take small steps that can lead to extraordinary outcomes.”

Singh Cassidy is a leading technology executive and entrepreneur, board member, and investor with twenty-five years of experience founding and helping to scale companies, including Google and Amazon. Most recently, she served as the leader of StubHub, the premier consumer ticketing marketplace for live entertainment, which she and her team sold for $4 billion. Earlier in her career, Singh Cassidy built Google’s business throughout Asia Pacific and Latin America, and served as the business co-founder of fintech pioneer Yodlee. She is currently Founder and Chairman of theBoardlist, a premium talent marketplace for diverse leaders to be recommended and discovered for board and executive opportunities. She also serves as a board director at Urban Outfitters and Upstart, and as a member of the global advisory board of TIME’S UP.  Previously, she has served as a board member at TripAdvisor, J.Crew, and as a strategic advisor to Twitter. Singh Cassidy has been profiled in Fortune, Forbes, The Wall Street Journal, Business Week, The New York Times, and was once named one of Elle’s Power Women.

Choose Possibility Take Risks and Thrive (Even When You Fail)

The pandemic may have made many of us more risk-averse, but ironically, it’s also taught us an essential lesson about the role risk plays in our lives: whether we embrace it or shy away from it, in an increasingly volatile world, we will continue to encounter risk everywhere. Our biggest opportunity is to become agile and adept at taking risks to grow—treating it  like a repeatable process we can practice, not a one-off event.

Sukhinder Singh Cassidy is no stranger to risk. One of the most well-respected female tech executives in Silicon Valley, she has taken hundreds of personal and professional risks throughout her career. And what she’s come to realize is that success does not come from making one singular “correct” or “big” decision; rather, it comes from tackling a series of small choices, aimed at optimizing future possibilities.

What the world needs is a new paradigm, says Singh Cassidy. A risk-taking framework that can help each of us have a healthy, proactive, and ongoing relationship with risk in order to unlock our own impact. In this fascinating presentation, she shows us how we can build that paradigm, using deeply personal stories alongside a simple set of frameworks anyone can understand. Audiences from every walk of life will leave this talk inspired to rethink their relationship with risk and find new growth: whether it’s managing change, reimagining work, or taking their careers to the next level.
DEI: Diversity, Equity, & Inclusion

Building a Culture of Belonging Starts With Leadership

As the highest decision-making body in an organization, a board must reflect the values of its company. But having diverse perspectives in leadership isn’t enough. An inclusive culture that supports each member’s unique lived experiences, celebrates their difference, and ensures everyone is equally heard is critical—both for galvanizing support for diversity, equity, and inclusion initiatives, and creating a healthy, equitable workplace in general.
Sukhinder Singh Cassidy knows first-hand the challenges of working in largely white, male-dominated spaces. A first-generation Indian immigrant, she navigated her way to becoming one of the most highly regarded women in tech—working for companies like Google, Amazon, and StubHub over the course of her 25-year-career. Today, she’s the founder and chair of theBoardlist: an organization connecting exceptional, diverse talent with global board opportunities. “Our ultimate goal is to help companies create full and true representation in their leadership, so that they can better serve their customers, employees, and communities,” says Singh Cassidy. This talk is an extension of that mission—debunking the myth of the “pipeline problem” to help companies build more equitable boards, leadership, and cultures.
Filled with exciting and personal stories gleaned from years of on-the-ground experience, this talk reveals how Singh Cassidy has built companies, scaled businesses, and thrived as a diverse leader—and how you can apply these strategies to your own organization, deepening your brand’s impact from the inside out.
Leadership

Diary of a CEO Secrets to Scaling Yourself and Your Teams

There is a notion of the journey from founder to CEO. But on-the-ground, this journey rarely pans out in a linear fashion, says Sukhinder Singh Cassidy: a leader with over 25 years of experience founding, scaling, and advising companies like Google, Amazon, and StubHub. What she’s discovered along the way is the conventional leadership wisdom we so often hear doesn’t necessarily serve executives hoping to take themselves, their teams, and their organizations to the next level.
In this powerful presentation, Singh Cassidy debunks overly simplistic business advice with no grasp on reality. In its place, she offers an actionable roadmap for how to become truly multifaceted leaders who can attune to their companies’ needs—even if that means venturing outside their comfort zone.
With credentials running and scaling teams from day one—running multi-billion dollar, global organizations with thousands of employees—Singh Cassidy has unique insight to what makes a great leader. She offers her wealth of experience in a way that is fresh, engaging, and most of all, motivating for anyone hoping to maximize their growth.

Take Risks and Thrive (Even When You Fail)

Sukhinder Singh Cassidy: Either You Manage Me or I Manage You