Art isn’t about making pretty pictures. Images should be as challenging as the issues we face. 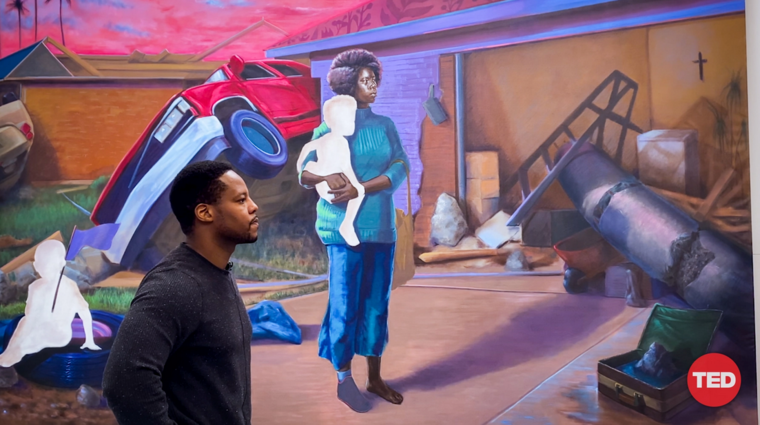 Can Beauty Open Our Hearts to Difficult Conversations?

How Can Visual Art Speak to the Spirit of Social Justice and Civil Rights?

Urgent and timely, Titus Kaphar’s artworks capture the spirit of social justice and change in America today (exemplified in his TIME cover portrait of the Ferguson protests). Named a 2018 MacArthur Fellow for “highlighting the lack of representation of people of color in the canon of Western art with works that deconstruct the literal and visual structure of the artwork,” Kaphar’s art and talks expose racism, inequality, and a criminal justice system that is anything but just.

“Art is a language. There is always a narrative coded in painting and sculpture. When you look at something, ask yourself, who is represented and who is invisible?”

Titus Kaphar works with history—history writ large, as well as his own story, familial and personal—to offer a stirring portrait of the here and now. His body of work is diverse, in both form and substance, speaking to the most vital discussions happening around race, diversity, and reconciliation in the United States.  Recently, Kaphar collaborated with poet Reginald Dwayne Betts on The Redaction at MoMA PS1. Drawing inspiration from lawsuits filed by the Civil Rights Corps (CRC) on behalf of people incarcerated because of an inability to pay court fines and fees. Together,  the voices of poet and artist blend with those of the plaintiffs and prosecutors, reclaiming these lost narratives.

As an engrossing keynote speaker, Kaphar exposes how all depictions, no matter how personal or grandiose, are always imperfect, and capable of being remade. In recognition of his powerful vision, TIME magazine commissioned him to create an artwork in response to the protests in Ferguson, Missouri—freezing in time an unforgettable moment of potential, protest, and civil rights upheaval. In The Jerome Project, he explores the overwhelming volume of men trapped in our criminal justice system bearing his own father’s name. The mug shots of these ‘Jeromes,’ all African-American, are re-imagined as gilded, devotional subjects submerged in tar—signaling how much time they’ve lost in prison as well as a historical form of torture. For Drawing the Blinds, Kaphar re-mixes the work of Classical and Renaissance painters, interrogating the history of aesthetics while revealing marginalized, forgotten figures.

“Shining a fierce, restorative light on those left in the shadow of history,”

— The New York Times on NXTHVN

Kaphar’s arts incubator, NXTHVN is a $12 million nonprofit center and fellowship program that nurtures rising talents. Kaphar also collaborated with For Freedoms’ 50 State Initiative, a cross-country art project promoting passion and participation in the democratic process.  He also completed a sculptural commission for Princeton University Art Museum (to coincide with the opening of the Princeton and Slavery project). The sculpture has been strategically erected on the lawn of the MacLean House, where former university presidents lived and owned slaves.

Kaphar’s previous exhibitions include Unseen: Our Past in a New Light, Classical Disruption, Shifting Skies, 99 Jeromes, Beyond a Veil of Beauty, Reconstruction, and History in the Making, and more. He is the distinguished recipient of the Gwendolyn Knight and Jacob Lawrence Fellowship, as well as the Creative Capital Award and Rauschenberg Artist as Activist Fellowship. His work has been included in the collections of the Museum of Modern Art, the New Britain Museum of American Art, the Yale University Art Gallery, and the Brooklyn Museum, as well as in the Studio Museum in Harlem (where he was Artist in Residence), the Smithsonian National Portrait Gallery and the Seattle Art Museum.  He received an MFA from the Yale School of Art and a BFA from San Jose State University.

Titus Kaphar left his father’s house when he was just fifteen. Twenty years later, after zero contact, his father reappeared, wanting to reconnect. Kaphar spent the next three days recording their conversations: asking questions, using the camera screen as a means of distance and objectivity. Later, when searching into his father’s past, he not only found his criminal record, but the records of 99 other men—all black, and all bearing the exact same name. Born out of this frightening discovery was The Jerome Project: paintings, video art, sculptures, and even a growing initiative to help young people with family locked inside the criminal justice system.

But for Kaphar, this is not an isolated body of work; rather, it’s one he’s been struggling with his entire life. In this deeply personal keynote, Kaphar confronts the full complexity of the American judicial system—its inequalities, its raw enormity—through his own lived experiences. In so doing, Kaphar puts a human face to an all-too-American story (much like his own father’s particular story, and life, dovetails with the social history and myths of black criminality). In essence, and like any great artist, Kaphar brings immediacy to abstraction—making distant notions about de-industrialization, generational poverty, and mass incarceration as familiar, and moving, as a portrait of someone we love.

If art is a language that speaks, what is it saying? In statue form, Roosevelt rides a horse and boldly stares into the future; meanwhile, nameless African American and Indigenous people walk on foot beside him. Statues of confederate soldiers loom over our civic institutions—our libraries and schools and offices—without context or apology. Who are the anonymous slaves, servants, and laborers appearing as footnotes in portraits of our Founding Fathers? What values are being expressed by the constitutional monuments dotting the American landscape? And why do we skip over chapters—entire peoples, entire histories—in our national narratives? In this powerful talk, Titus Kaphar imagines a renewed, more nuanced engagement with American history: envisioning new spaces for marginalized or forgotten bodies to enter, and disrupt, the evolving fabric of our culture. For this creator, the artist’s role is clear: to draw back the curtain on ignorance and deception, and amplify the voices of those who cannot speak for themselves. In a simple phrase, it’s to celebrate the truth. Join Kaphar—one of the country’s most exciting young painters—on a revealing, intellectually nourishing tour of the issues most in need of amendment.

An Artist Rises, and Brings a Generation With Him

Redaction: A Project by Titus Kaphar and Reginald Dwayne Betts

Titus Kaphar: Language of the Forgotten

A Contemporary Artist Is Helping Princeton Confront Its Ugly Past

On Being with Krista Tippett

Are We Actually Citizens Here?

In His New Work, Titus Kaphar Examines Racial Injustice In The Prison-Industrial Complex

From a Tropical Space is the latest series from Titus Kaphar, the award-winning painter, sculptor,...

“Who is represented? Who is invisible?” A Public Sculpture by Titus Kaphar Confronts a University’s Past

Controversy around America’s public sculptures has swept the nation—how should such a complex...

“We can’t erase this history. We have to know it.” Titus Kaphar’s New TED Talk Uses Art to Amend the Past

Titus Kaphar is a painter and sculptor, best known for his TIME Magazine portrait of Ferguson...

“Painting is a visual language where everything is meaningful, important, and coded,” says new...

The 2017 TED Conference is kicking off today in Vancouver, and nine members (comprising six...