In order to fight hate, let’s build a multicultural coalition of the willing. 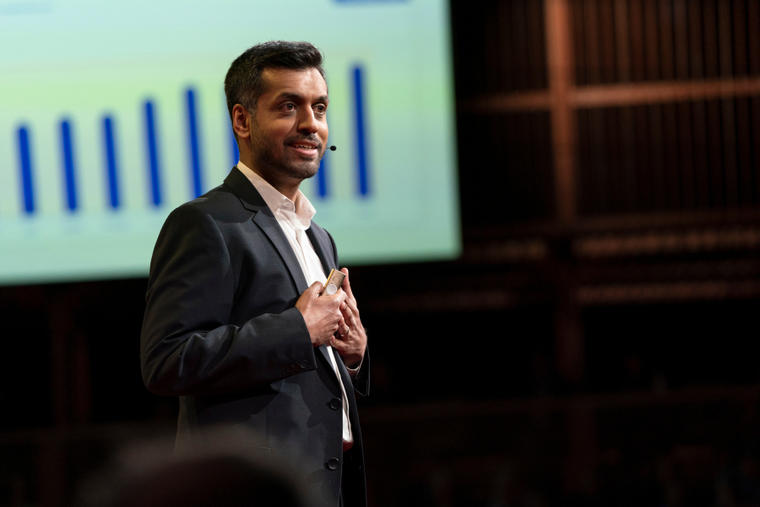 If You Don’t Write Your Own Story, Others Will Write It for You

How Did Memes Become the Vehicle for Hate

Fear Is Funded—and Here’s How We Know

Wajahat Ali is a new kind of public intellectual: young, exuberant, optimistic, and funny. And though today’s doomsday headlines report growing division and racial strife, Ali hasn’t given up on his vision of a truly multicultural America—free of hate, fear, and bigotry. With refreshing honesty and humour, the Daily Beast columnist and popular political commentator shows us how we can come together as a “multicultural coalition of the willing” and drive lasting social change.

“Wajahat Ali’s deeply personal and keenly perceptive memoir is a clear-eyed account of his American immigrant experience.… We are all fortunate to be on the receiving end of not only his intellect, but his humanity and heart.”

As a Daily Beast columnist and former New York Times contributing op-ed writer, highly sought-after political commentator, TED speaker, and award-winning playwright, Wajahat Ali is undoubtedly a jack-of-all-trades. But across his many roles, one thing remains constant: Ali uses his platform to fight tirelessly for the social change we need in our country—and he isn’t afraid to get personal while doing it. His memoir Go Back to Where You Came From: And Other Helpful Recommendations on How to Become American share stories, both hilarious and poignant, of Ali’s experience growing up a Muslim Pakistani-American in an effort to inspire a new vision of America’s multicultural identity. New York Times bestselling author Reza Aslan describes it as “A hilarious and heartwarming treatise on what it truly means to be American in the twenty-first century.”

When his two-year old daughter’s battle with liver cancer took him on an unexpected and devastating journey through the U.S. medical system, Ali wrote about it with his signature candor and openness for the New York Times: “A crisis like cancer helps us answer the question: What truly matters when we are stripped overnight of our comfort, wealth, and plans?” As the coronavirus pandemic and recession poses a similar question to millions of people across the country, Ali offers his experience as a beacon of hope and resilience in the face of an impossible situation. Above all else, Ali is living proof that we can use our authentic stories—whatever they may be—to build the America we wish to live in.

Ali is also the author of The Domestic Crusaders—the first major play about Muslim Americans post-9/11— as well as the Peabody-nominated producer of the documentary series The Secret Life of Muslims. He was the lead researcher and author for the Center for American Progress’s seminal report “Fear Inc., Roots of the Islamophobia Network in America,” and served as a national correspondent for Al Jazeera America. There, Ali told stories of communities and individuals often marginalized or under-reported in mainstream media.

Previously, as Creative Director of Affinis Labs, Ali worked to create social entrepreneurship initiatives to support and uplift marginalized communities. He also worked with the US State Department to design and implement the “Generation Change” leadership program to empower young social entrepreneurs. Ali initiated chapters in eight countries, including Pakistan and Singapore. For his work, he was honored as a “Generation Change Leader” by Sec. of State Clinton and recognized as an “Emerging Muslim American Artist” by the Muslim Public Affairs Council. Ali has given keynote speeches around the world such as TED, The Aspen Ideas Festival, Google, the United Nations, and The New Yorker Festival. His writing appears regularly in the New York Times, The Atlantic, The Washington Post, and The Guardian. He’s a Senior Fellow at The Western States Center and Auburn Seminary and co-host of Al Jazeera’s The Stream.

“Everything was amazing! Waj and Jeff's sessions were great. We couldn’t have asked for better speakers on this topic. Lavin was a wonderful partner and I hope we can work together in the future.”

“What made Wajahat so perfect was that he had both a deep sense of social justice and a great sense of humor.”

Hate. Fear. Anger. Racism. Political polarization. Fake news. These are modern trends rooted in age-old anxiety—the fear of the “unknowable other.” America today is divided and confused, full of tremendous uncertainty. However, Wajahat Ali argues this is also a tired remake. From the rise of white nationalism to anti-immigrant conspiracy theories, America can often feel like an intolerant space, where diverse communities are the frequent targets of bigotry and far-right ideology. But Ali imagines an America remade: united over our shared values, not torn apart by racism or hate. Our country can achieve its pluralistic potential, he says. But first, we’ll need to emerge from our partisan cocoons, reach across the aisle, and build lasting partnerships. We need to see religious and cultural difference as the ideas that can bring us together, not rip us apart. And we have to create what he calls a “Multicultural Coalition of the Willing”: a sort of Justice League of diverse Americans who can unite over commonalities. We can resist the forces of bigotry, Ali insists; and in this keynote, he imagines a way to achieve the American Dream for everyone.
Motivational

Wajahat Ali was a shy, overweight, perpetually sick, left-handed only-child of Pakistani immigrants. He was born in America, but only learned to speak English at the age of five. At the age of 21, he left university to help his family. At one point, he lost his family home and was reduced to a $20 bill and 3 cents in his bank account. How did this dorky, privileged kid, who lost everything in his 20s, end up pursuing and fulfilling his goals of becoming an attorney, an award-winning playwright, and the co-host of a popular daily talk show? In this talk geared for college students and young professionals, Ali charts how he used failure, awkwardness, economic hardship and the last recession to fuel his unexpected growth from the awkward fifth-grader who almost got kicked out of school to becoming a talk show host and writer for The New York Times. This eventful journey is a funny, heartfelt and practical story of how to use your passion to help overcome hardships and still achieve your goals.
DEI: Diversity, Equity, & Inclusion

In this deliberate, hilarious, and blunt keynote speech, Wajahat Ali gives practical advice and measures on how an organization, a business, or a community can create a diverse and inclusive culture that isn’t just a bumper sticker ideology or a brochure cover with token people of color. Ali shows how a truly diverse and inclusive environment should be about intentional representation and equality. He argues forcefully and convincingly that true diversity is not just toleration and acceptance, but rather it’s a constant disruption, rewarding journey, and necessary challenge that will create economic, social and creative benefit in the long run for all communities.

Go Back to Where You Came From

And Other Helpful Recommendations on How to Become American

45 American Men on Being Muslim

The Roots of the Islamophobia Network in America

My Toddler Survived Cancer. Then Came the Coronavirus.

Have faith, but tie your camel first

A Muslim Among Israeli Settlers

The First Half of MJ

I Want 'Allahu Akbar' Back

Preparing for Hajj With a Dad Brain

The Contradictions of Hajj, Through the Lens of a Smartphone

Do Muslims Have to be Democrats?

Americans will always rather feel safe, than be free

On Eid, here’s how Ramadan changed my despair about the world into hope

Here’s ‘What’s Going On’ With Muslims

Inshallah Is Good for Everyone

Mr. Trump, I’m used to standing out in the crowd.

“Please don’t let it be a Muslim”

Sex and Islam do mix, but not in America

Veiled Threat: The many problems with France's proposed burqa ban.

While some consider religion a pillar of morality and community, others believe it to be the root...

“I believe we can and should fight for the earth and humanity, side by side.” Watch Wajahat Ali’s Viral TED2019 Talk.

More and more people, globally, are choosing not to have children. And this projected decline in...

CNN spent a year interviewing more than 100 American Muslims, asking who they believed were the...

“A crisis allows for an opportunity,” says writer and commentator Wajahat Ali in a new video essay...

The Real Strength of American Diversity: Wajahat Ali on Unity in the Age of Trump

As the Trump era dawns, how can we preserve our welcoming nation? To renowned playwright and...

A brand-new initiative from PEN America will showcase American Muslim storytellers and their allies...

The Donald Trump-Ghazala Khan saga has evolved once again. Khan, the mother of slain U.S. military...

Dispelling Islamophobia, One Word at a Time: Wajahat Ali in The NYT

In his Sunday op-ed for The New York Times, Wajahat Ali reports on how a college student was...

How to be a Moderate Muslim: Speaker Wajahat Ali in Salon

Earlier this week, speaker Wajahat Ali addressed Islamophobia in the aftermath of the Charlie Hebdo...