Space technology is imperative for sustainable development on Earth—and for the benefit of all.

Prof. of Social Psychology & Organizational Behavior at Stanford | Director of the Polarization and Social Change Lab 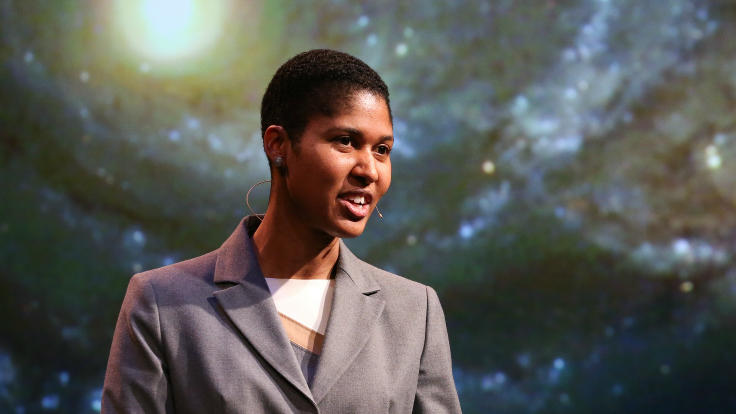 TED | 6 Space Technologies We Can Use to Improve the Earth

Danielle Wood brings space technology back down to Earth. The Director of MIT’s cutting-edge Space Enabled Research Lab, Wood takes the tools that typically orbit us, and applies them to projects advancing social good on our home planet—whether that’s improving water sources for African teens, or preventing the next famine. Her talks break down the most complex, cosmic technologies to show us how, with the practice of innovation and a little entrepreneurial spirit, they can be used to improve humanity.

“Danielle’s talent and dedication to using Earth observations to advance justice worldwide makes her an inspiration to all of us.”

“How can a satellite be an instrument of justice?” asks space engineer, teacher, and scholar Danielle Wood. As Director of the MIT Media Lab’s Space Enabled program, Danielle considers how we can repurpose satellites, which we already use for cell phone and Internet service, to change the world for the better. Collaborating with local and national governments, non-profits, and entrepreneurial firms, Danielle and her team identify opportunities for space technology to improve public services and solve global problems. This includes working with NASA on advancing the United Nation’s Sustainable Development Goals or joining local scientists in Ghana to combat environmental threats.

Danielle serves as head of MIT’s Zero Robotics program, where middle and high school students code robots that are used on the International Space Station for future missions to Mars. She’s inspiring the next generation of great minds by giving them the access and resources to explore science, technology, engineering, and math through collaboration. She is committed to creating new opportunities for every student who is interested in STEM fields, securing the program a $1.18 million grant from NASA to increase the participation of Native and Hispanic students in STEM education.

Her integral work is reflected in the multi-award-winning documentary Zero Gravity, directed by Thomas Verrette—a powerful and inspirational story of three diverse middle-school students and their teacher as they embark on a personal quest to challenge teams across the nation in a coding competition that sees them working on International Space Station satellites in real-time.

For her cutting-edge work on the relationship between space science, Earth observations, and justice, Danielle was inducted into the International Academy of Astronautics. “Space belongs to all countries,” she says. “Every country deserves equal opportunities to pursue scientific achievement for societal benefit.”

Recently, Danielle was invited to speak before the U.S. House Committee on Science, Space, and Technology for a hearing on Space Situational Awareness. There, she spoke about the nation’s role in achieving global sustainability on land, in the ocean, in the atmosphere, and in space, drawing from her work with the Space Enabled Lab, as well as with the Space Sustainability Rating—an initiative developed by The World Economic Forum to reduce debris and encourage responsible behavior in space—where she serves as a co-lead.

“Dr. Wood was wonderful and incredibly inviting. Her talk was fantastic.”

“The event was incredible. Danielle left our company so inspired to create an inclusive future of space.”

The sky isn’t the limit for the middle and high school students in MIT’s Zero Robotics program, who code robots that are used on the International Space Station for future missions to Mars. Danielle Wood serves as the head of the program, inspiring the next generation of great minds by giving them the access and resources to explore science, technology, engineering, and math through collaboration. She is committed to creating new opportunities for every student who is interested in STEM fields, securing the program a $1.18 million grant from NASA to increase the participation of Native and Hispanic students in STEM education.

Danielle’s work is reflected in the multi-award-winning documentary Zero Gravity, directed by Thomas Verrette—a powerful and inspirational story of three diverse middle-school students and their teacher as they embark on a personal quest to challenge teams across the nation in a coding competition that sees them working on International Space Station satellites in real-time.

Together, Danielle and Thomas join forces for a riveting talk that includes an exclusive screening of this award-winning documentary and behind-the-scenes insights about the Zero Robotics Program: its history, emphasis on diversity and empowerment, its deep relationship with NASA, and its eventual legacy as we set our sights on Mars. Danielle teaches us that programs like Zero Robotics are not only integral to space exploration but a vital part of introducing young people to STEM fields, offering equal opportunities for diverse groups of students, and raising up the next generation of change-makers—on Earth and beyond.

As director of the Space Enabled Research Lab, Danielle Wood’s mission is to advance justice in Earth's complex systems by using designs enabled by space research. In this entrepreneurial and inspiring talk, Wood explores the six types of space technology that she and her team are using to support societal needs. These include satellite earth observation, satellite communication, satellite positioning, microgravity research, technology transfer, and the inspiration derived from space research and education. As she poignantly shares, barriers remain that limit the application of space technology as a tool for sustainable development. Here, Wood explains how she challenges these barriers, sharing the multiple disciplines that she works with: design thinking, art, social science, complex systems, satellite engineering and data science. Whether you’re an aeronautical engineer or an social entrepreneur; an astronaut or an actuary, Wood’s talk shows how cross-discipline and cross-organizational collaboration will ultimately take us farther in our goals. Through it, we can collectively bring about a more just, and more innovative future.

How Can Space Technology Improve the Life of All People?

Much like the environment on Earth, conditions in space are worsening. Today, 20,000 pieces of...